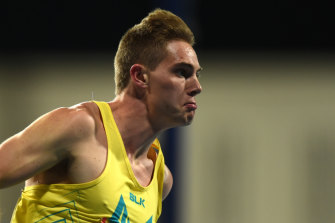 James Turner claimed his second gold medal of the championships for Australia.Credit:Getty Images

Clifford dominated the 5000m (T13) final, with the help of sighted guides Philo Saunders and Tim Logan who both ran 6.1 laps each, to take gold after his 1500m win on the opening night of the nine-day titles.

They delivered Australia's seventh and eighth gold medals respectively. Along with shot putter Claire Keefer taking bronze in her F41 class, it was another three-medal haul for Australia.

Turner arrived in Dubai with a revised plan from the London world championships two years ago, and executed it beautifully here.

Alongside his coach Iryna Dvoskina he won the 100m on Sunday and the 400m – both in world record times.

It was Turner's fifth gold medal from two world championship appearances and Australia's seventh in Dubai.

Keefer kept her remarkable world championships run intact with a bronze in the shot put (F41) on Thursday night.

She made everyone hold their breath in the sixth and final round, when she let out her longest throw of the night of 9.19m that moved her back into the medals.

On the track, wheelchair racer Rheed McCracken qualified for Friday's final of the men's 800m (T34) by placing third in Thursday night's heat (1:52.07).