Jessica Hull remains with the same coach from the former Nike Oregon project that she was with before the disgraced head of that project, Alberto Salazar, was banned last year and the Nike project folded.

That continuity of coaching she said had helped her move on seamlessly from the scandal of Salazar's doping ban. Last week she set a new Australian indoor record for the 1500 metres. 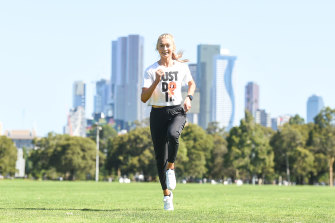 Jessica Hull is ready to show her style at the Melbourne Track Classic on Thursday night.Credit:Justin McManus

Hull had joined Salazar’s Nike Oregon Project only three months before the high-profile coach was handed a four-year ban for doping.

Hull was on the eve of the biggest races of her career at the athletics world championships in Doha  when news broke of Salazar’s doping charges. She was unfazed by the attention then and remains equally unperturbed now.

“I was just so ready to race in Doha, I'd done so much hard training and we had done a lot of key workouts that indicated what I was capable of, so I was set on showing myself what I could do on the world stage,” she said.

"I became very good in college, in the NCAA [where she won four titles running for the University of Oregon] of knowing you have to learn to focus on yourself and I think I did a really good job of staying in the moment and not letting what was going on outside distract me because it didn't affect me whatsoever with my coaching set-up.”

Her coach then, Peter Julian, remains her coach now. She is still based in Oregon.

“It was a smooth transition in training because nothing for our group really changed that much. From the start I’d only ever been with Pete as coach and my two main training partners were the same, so for me nothing has changed and it’s very professional in the way they do things, they do everything for us.”

It proved to be no distraction in Doha for she made the semi-final, ran a personal best and missed the final by a place.

It has been no distraction since: last week she broke the Australian 1500m indoor record at a race in Boston when she ran 4:04.14.

“It was crazy, I wasn't expecting to run that fast so early … it was an opener and you just have to ride that train,'' she said.

“I asked my coach on the Tuesday before the meet, What do you think I can run? He said you are in 4:05 shape. It was a really nice surprise.”

She is qualified to run at the Tokyo Olympics this year in both the 1500 and the 5000 but will wait until the last minute to decide which she will focus on – the schedule doesn’t allow her to do both.

“It’s an exciting position to be in," she said.

Hull will compete on Thursday night at the Melbourne Track Classic at Albert Park.

Parkruns cancelled across UK over coronavirus

Peter Gulacsi has gone from Hereford United to a Champions League semi
We and our partners use cookies on this site to improve our service, perform analytics, personalize advertising, measure advertising performance, and remember website preferences.Ok