Home » Athletics » ‘Steve, don’t compete’: When the mind takes over in elite sport

Dig a little deeper and you find the pair had something in common at last year’s Tokyo Olympics. 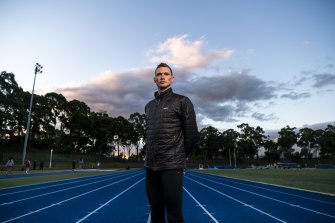 Both were paralysed by a fear of failure.

When Biles, a champion of her sport, pulled out of the women’s all-around gymnastics final, it was arguably the biggest story of the Games and one that stunned the world.

She wrote on Instagram: “I truly do feel like I have the weight of the world on my shoulders at times.”

Biles returned to win a bronze medal in the beam final and was lauded for prioritising her mental health. 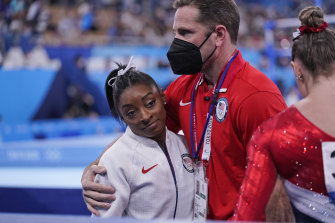 As a 19-year-old at the London 2012 Games, Sydneysider Solomon became the first Australian since Cathy Freeman to make an Olympic final on the track. After finishing eighth in London, Solomon failed to qualify four years later in Rio. The disappointment rocked him.

Solomon sneaked into the team for Tokyo and digested the news of Biles’ shock withdrawal a few days before his 400m event.

“Every athlete just felt crushed for Simone Biles,” Solomon, an ambassador for the Australian Institute of Sport’s Mental Fitness Program, tells the Herald ahead of the World Athletics Championships beginning this week in Oregon. 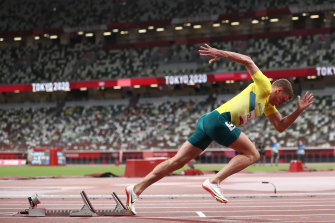 Steven Solomon launches out of the blocks in the semi-final of the men’s 400m event in Tokyo. Credit:Getty

“Here is an athlete who has basically never lost and it comes into her mind that there is a chance that she might lose. It was incredibly telling for the entire athlete community and the entire global community that you can be at the top of your game forever, but if you aren’t practising the skills and taking the time to be conscious of the ways different things can go wrong – including the mind and the body – then you’re not protecting yourself as best as you can.

“I think athletes are really starting to talk about it more and it’s a positive thing.”

Solomon says he’s never suffered depression or had mental health issues but is all too familiar with performance anxiety. 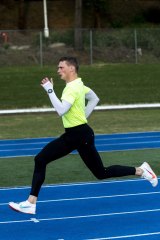 Solomon training in Sydney ahead of the Commonwealth Games.Credit:Rhett Wyman

It almost cost him a place on the starting line in Tokyo.

“I’ve seen the mind play tricks,” Solomon says. “Walking into the call room in Tokyo, my mind was trying to get me out of that situation. It was saying: ‘Steve, don’t compete’.

“Eight weeks before the Olympics, I wasn’t running. I’d torn my calf. I’d only competed in one competition in 2021, which was the national championships, which I lost for the first time because I couldn’t get healthy. First it was my back, my calf, then my other calf. That builds a lot of stress.

“I take a biological approach to it. My understanding of it is we’ve been designed through evolution to survive and anything that is perceived as a threat from an evolutionary standpoint, our body is trying to get us away from it. So when we go out and expose ourselves to competition, where we put our reputation on the line … part of the nervousness of that is the chance of losing and failing. It’s perceived as a threat … so that’s why the mind goes there.

“Overcoming that and going on to run the fastest time I’ve ever run in my life in Tokyo, breaking a personal best that I’ve had for nine years, beating the world-record holder, all of those things affirmed this is just what happens in the mind.

“I’m thankful I haven’t had that deep depression … but I know many athletes who have.”

Once Solomon crossed the line in 44.94 seconds in his heat – a personal best – he couldn’t control what happened next.

“I just started yelling. I stopped and looked at the board. I can’t describe it. It was very emotional,” Solomon says.

“When Ash Barty won the Australian Open earlier this year, she just had that primal scream. Missing out on Rio was a build-up towards that. I think it was a very important experience in my life.”

Retirement isn’t on the cards for Solomon, just yet. Despite working a day job at Uber Eats, he will captain Australia’s Commonwealth Games athletics team in Birmingham in August and has the drive and desire to grind away until the 2024 Paris Olympics.

“It’s a nice break from the stresses,” Solomon says of his day job. “If you spend the entire day thinking about the training session that’s going to have you on the ground vomiting, plus the headaches, being tired and sore … it’s not as productive as going and putting your time and energy into something else.”

In between a busy schedule, Solomon found time to walk the Harbour Bridge earlier this year to raise money for the Black Dog Institute, as part of BridgeClimb Sydney’s “Climb for a Cause” event, which raised over $70,000.

“I love the attention that is being brought to the mental side of anything,” Solomon says.

The heats of the 400m event begin on Sunday and will be an excellent dress rehearsal for the one-lap race in Birmingham next month.

“The 400-metre event is probably the most competitive in the Commonwealth Games,” Solomon says. “We have the world-record holder Wayde van Niekerk who is from South Africa. We have the current world and Olympic champion Steven Gardiner, who is from the Bahamas. We also have the Trinidad and Tobago guys.

“We’ll have to see who turns up and who recovers well from Birmingham but if I can get there with a good block of training under my belt, the expectation is to hopefully bring home some silverware.” 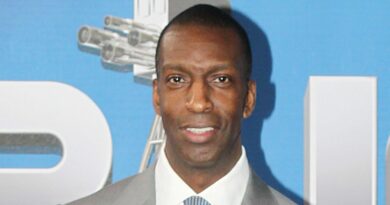 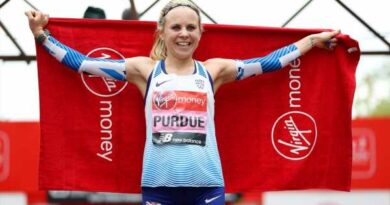