Home » Basketball » After an offseason it would like to forget, Kansas looks like it could be heading for a season to remember

INDIANAPOLIS — The Kansas basketball program took a reputation-hit last month via the federal trial centered on corruption in college basketball because of, among other things, text messages and wiretaps entered into evidence that detailed questionable conversations between the KU staff and two former Adidas employees who are now convicted felons. There was no so-called smoking gun, which is why Bill Self continues to coach without issue or interruption. But it was still a bad look that will, for most fans of most other programs, somewhat taint the string of Big 12 regular-season championships Kansas has won.

Folks will forever question the methods.

And yet none of it mattered Tuesday night.

When the Jayhawks entered the court here at Bankers Life Fieldhouse, they did so to a rousing ovation and as college basketball’s top-ranked team thanks to a roster loaded with five-star freshmen guards and experienced and overwhelming bigs. Yes, they’re missing Silvio De Sousa because his guardian allegedly accepted impermissible benefits to enroll the 6-foot-9 forward at Kansas — which could ultimately force the school to vacate its 2018 Final Four appearance. But that didn’t stop the Jayhawks from jumping to a 17-point first-half lead and holding on for a 92-87 win over 10th-ranked Michigan State in the opening game of the Champions Classic.

The offseason is over. The season is now here. So the in-court drama has been replaced by on-the-court dominance. Perhaps not forever. But at least for the time being.

“I thought we did a lot of good things,” Self said. “And I thought our freshmen stepped-up and played extremely well.”

The freshmen are Devon Dotson and Quintin Grimes — two five-star guards Self decided to make his starting backcourt, along with senior Lagerald Vick, from Day 1. Forty minutes into this season, it looks smart. Dotson took 11 shots, made six and finished with 16 points, three assists and three steals. Grimes took 14 shots, made seven and finished with 21 points and four assists. They combined to go 9-of-15 from 3-point range in their first game on a massive stage.

“We talk about it in practice — always stay aggressive,” Grimes said. “We practice shooting balls, and that confidence [carried] over into the game.”

Meantime, Dedric Lawson was the same statistical monster he was for two seasons at Memphis before transferring to Kansas after ex-Memphis coach Tubby Smith demoted his father into an administrative role. The 6-9 forward wasn’t good offensively against Michigan State — Self attributed it to the Spartans’ “physicality” — but still led the Jayhawks with 20 points, 14 rebounds and six assists. And that, more or less, is why Lawson is a CBS Sports First Team Preseason All-American — because he’s going to fill the box score pretty much every game for a true national-championship contender that will likely secure a 15th-straight Big 12 title in late February/early March.

Bottom line, it’s hard to insist Kansas is the clear favorite to win the national title — even while they’re ranked No. 1 in the Associated Press poll and coming off of a win over a top-10 team — considering what Duke did to Kentucky in the nightcap of the Champions Classic. The Blue Devils looked impossibly strong and will move to No. 1 in the CBS Sports Top 25 And 1 on Wednesday morning, for better or worse. But, just as I said and wrote all offseason, the Jayhawks are worthy of their No. 1 ranking — and they did nothing Tuesday night to embarrass those who anointed them.

The starting guards were terrific

The starting bigs were big.

The bench was useful.

So, yeah, it might’ve been a rough October for Kansas, and the Adidas jokes will never stop. But now it’s November. The games have started. The in-court drama is in the past — at least for now. And the on-the-court dominance is officially underway. 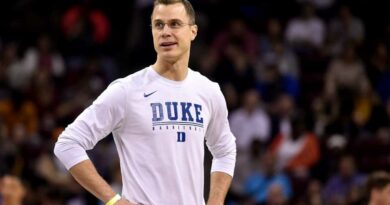 Who is Jon Scheyer? What to know about Mike Krzyzewski’s replacement at Duke