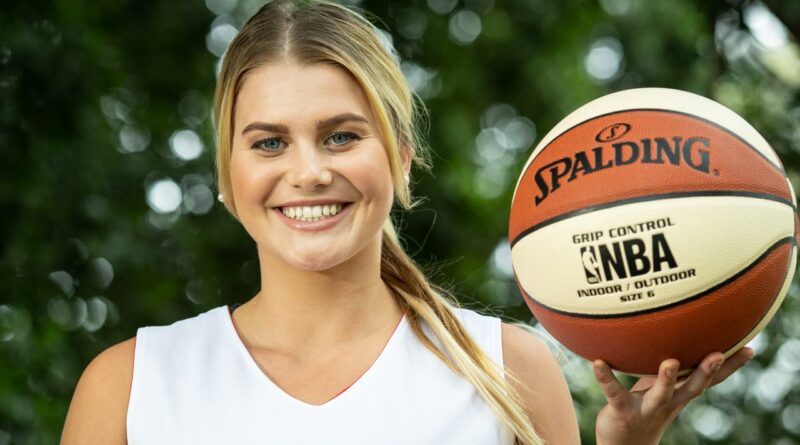 The WNBA stars had just led the Southside Flyers to their 99-82 championship victory over Heal and Townsville Fire before seeking out Australia’s most exciting basketball prospect in years.

“We can’t wait to play with you,” they told her.

Shyla Heal comes up against Leilani Mitchell in the WNBL decider.Source:News Corp Australia

To hear those words from her idols just months before the 2021 WNBA Draft meant everything to the youngster.

“After the grand final, Liz said to Zitina (Aokuso) and I that we’re the future of Australian basketball and that she can’t wait to play with us. Leilani said something pretty similar, too,” Heal said.

“That was pretty cool, coming from two WNBA players. Hopefully if I keep working hard and getting better, I’ll play beside them in the Opals team, that’s the main goal.”

Heal was phenomenal for Fire in 2020.

The point guard finished the season averaging 16.7 points per game – placing her in the league’s top five scorers, ahead of WNBA stars Mitchell (11.2ppg) and big Ezi Magbegor (15.4ppg).

In a gruelling and condensed six-week competition, Heal steered Townsville to the grand final and took out Youth Player of the Year.

It’s hardly surprising, given that the teenager is already a seasoned WNBL campaigner and has won gold medals for Australia’s in the junior ranks.

But it’s still an astounding feat for a 19-year-old.

“She played really well, but we expected her to play well,” former Australian Boomer Shane Heal said of his daughter.

“Playing with Townsville and (head coach) Shannon Seebohm was always going to suit her style. She had the opportunity to play her natural position and she showed that she’s one of the better point guards in Australia right now.”

Since her 2020 campaign, Heal’s 2021 WNBA Draft stocks have soared – multiple mock draft websites forecast the Aussie to be a first-round pick.

Heal’s form even prompted Australian WNBA legend Michele Timms to call her “a once in a generation talent” and also claimed that “I have no doubt she will be better than me and Draft pick #1 is where she should be sitting.”

“It’s really cool that they’re believing in me, from the start of my career. We’ve had a couple of meetings with them so far and they’re really supportive” Heal said.

Heal will now focus on her own training and upcoming Australian Opals camps, before the WNBA Draft in April.

“I’ve really done everything I already can. Now it‘s just up to all the scouts. I’ll hopefully get drafted to the best environment, where I can learn from the best players and also show what I can do at that level as well” Heal said.

Heal Snr said it has been special to watch his daughter be rewarded for her hard work.

“We’ve spoken about the WNBA as a goal and that she’ll be drafted somewhere. We’ve embraced that, rather than treat it as pressure. We’ve treated it as something that’s going to happen, ” he said.

“But there’s a process in place, you have to tick all the boxes and play great basketball. Now that’s done, it’s about resetting her, training as hard as she can … being in the best physical and mental place to be ready when she gets these chances.”

‘He gave us so much’: Fan’s tears and a rush for Bryant memorabilia

Close call: Wildcats come from behind to defeat United