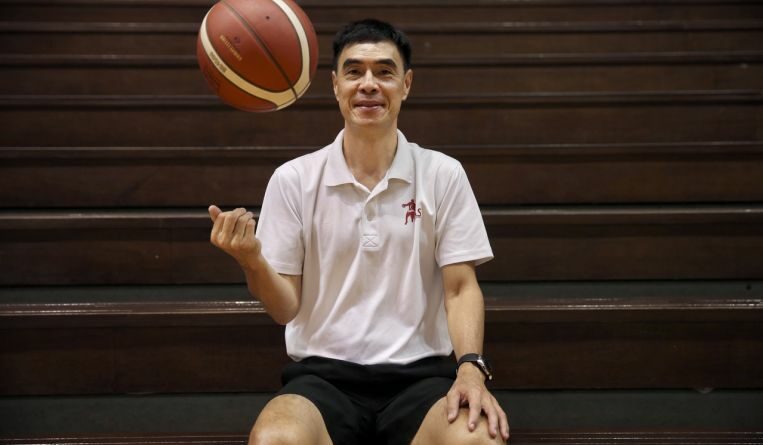 SINGAPORE – Koh Koon Teck has gone from being a competitive basketballer in his youth to holding several roles in the Basketball Association of Singapore (BAS) since 2003, including stints as the team manager at 2013 and 2015 SEA Games, where the Republic finished third.

Now, Koh, who was elected the BAS’ president in May, has even bigger plans for the sport as he eyes a place for Singapore at the 2032 Olympics in 3×3 basketball.

The 54-year-old believes that the inclusion of 3×3 basketball at the Tokyo Olympics could be a game changer.

He noted that the nature of the format would allow Singapore to be more competitive. It is less physical and so Asian players, who are of a smaller stature than many of their Western counterparts, are at less of a disadvantage. He pointed out that China and Japan, who were third and fourth respectively in the women’s competition at the Tokyo Games, are examples of Asian countries that have achieved success in the game.

He also explained that its relative novelty also makes the format more of a level playing field than the 5v5 format.

He said: “People see 3×3 as a street game, not a traditional sport. But now it’s an Olympic discipline. A lot of traditional powerhouses are not necessarily top because the requirements of this game are very different from 5v5.

“If you look at the statistics and how the game is structured, I think we stand a better chance than 5v5 in high performance.”

With 3×3 basketball stressing less about physicality and more on individual skills, the format is more suited for the Singapore context, as it requires fewer players and a greater focus would help develop players’ technical skills .

“The 3×3 discipline will help to solve a lot of local problems. It is about individual skills. If you don’t have individual skills, you can’t win games,” said Koh, who is head of the National Institute of Education’s Physical Education & Sports Science department.

The main aim now is growing the pool of 3×3 basketballers, especially those in primary schools. Starting early would help players develop strong fundamentals at an early age, and this foundation will help with the transition to 5v5 format later.

Currently, the National School Games’ junior division competition is played in a 3v3 format and Koh hopes to use that as a platform to generate interest among youths.

Another area that Koh will be focusing on during his two-year term will be getting the national teams ready for next May’s SEA Games in Hanoi. But with the disruptions to full-team training caused by the pandemic, Koh said a realistic target would be a fourth or fifth-place finish given that Singapore’s neighbours have had several more months of full-team training.

However, he is targeting a podium finish for the men’s team at the 2023 SEA Games in Cambodia.

Koh said: “We’ve missed Fiba Asia for a number of years. Only if you work towards and compete at that level, will your standard of play improve. For me, SEA Games is just one competition, we don’t just want to set our vision there. We want to create more competition exposure.”

Producing more competition opportunities for current players is another key area that he is looking at and he hopes to achieve this through several initiatives such as lengthening the National Basketball League season as well as introducing a semi-professional league with foreign players.

With team sports badly affected by the pandemic, restarting basketball is also high on Koh’s agenda.

The BAS is launching the 1st BAS National Skills Challenge, a skills challenge circuit, which will take place in December at the Singapore Basketball Centre. The event, which will follow the current safe management measures that limit sports activities to groups of two, will see participants completing stations that test their various basketball skills.

Participants can sign up in groups of four, but will have to complete the stations individually, with their scores added up at the end of the challenge.

Koh said: “We need to rethink the way we organise competitions. In the past it was all five-a-side, but the safe management measures mean we need to change people’s mindsets that when we are talking about competitive basketball right now, we could be talking about 2v2, 3v3 or 4v4.

“If we just wait for 3v3, we can’t organise anything. There won’t be competitions and there’s no motivation for the players either.”

The Basketball Association of Singapore is welcoming those residing in Singapore to participate in its logo design contest, which carries a $1,000 prize and runs until Nov 30.

Participants are invited to create an original, minimalistic, and modern logo that resonates with BAS’ vision and mission.

A panel will select the top five submissions before the winner is decided based on the numbers of comments received on both Facebook and Instagram from Dec 17-23.

The registration form and more information can be found on www.bas.org.sg

Koh said: “Our 2032 plan outlines ambitious and substantial focuses for the following 10 years.

“We want to involve Singaporeans, especially basketball lovers, to journey together with us to achieve our 2032 goal. We are also moving away from a male-dominant logo while promoting gender equity through basketball. We decided that this is the right time to rebrand the logo for BAS.”

College basketball rankings: Duke is No. 1 in the Top 25 And 1 heading into the Maui Invitational