Home » Basketball » Boomers double down on US win with Nigeria annihilation 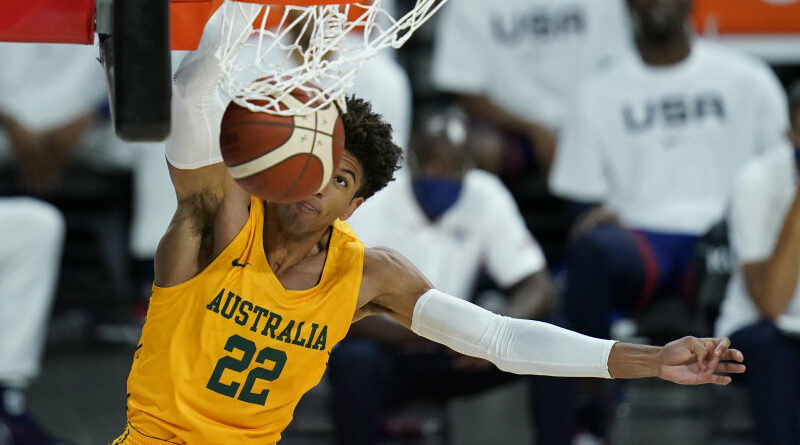 The Boomers have made another statement ahead of the Olympics, this time without four of their biggest names, after remaining undefeated in the Las Vegas exhibition series with a dominant 108 69 win against Nigeria.

This was an opportunity to showcase the depth in the Australian squad and provide valuable game time to several members on its fringes.

Like Australia, Nigeria came into the contest buoyed by an upset win against Team USA, but were never in the contest after being blown off the court early. The result potentially inflicted a psychological blow against the Tigers, one of the teams the Boomers are grouped with in their Olympic campaign alongside Italy and Germany.

Chris Goulding led all scorers with 21 points, the result of a stunning shooting performance in which he nailed every one of the seven three-pointers he attempted.

“We’ve got a good system, I’ve been playing in it for quite a lot of years now,” Goulding said. 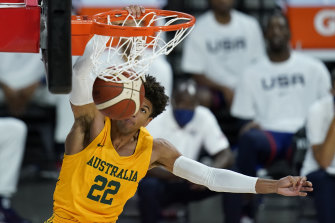 The Boomers made it two big wins on the hop with a 39-point demolition of Nigeria.Credit:AP

“I’m pretty confident in where I can find my shots.”

The Boomers have never earned a medal at the Olympics, but Goulding believes this team is capable of improving on a spate of fourth-placed finishes.

“It would mean a lot to Australian basketball, to Australian sport. We’ve been at this for a long time, many teams have gone close.

“There are so many guys who have been a part of this program for the past 15 years, going on that long. To have the pain of tournaments where it hasn’t gone our way, we’re focused, we’ve got one goal and that’s to try to win a gold medal. We’re going to Tokyo to try to do that.”

Australian assistant coach Adam Caporn said his side’s defensive effort was the most pleasing aspect of the performance.

“I’m really proud of the effort we’re putting on the defensive end, scrambling, helping each other out,” Caporn told ESPN.

“I think our bigs have done a great job on the pick and roll and containing their guys.

“We want to keep building, refining our roles. It’s a really short sprint to the first game [in Tokyo] and we’re constantly adding things.

“We’re excited with how it’s going.”

The Boomers led by 13 points by the end of the opening quarter, by which time Nigeria coach Mike Brown knew his team had been given a big wake-up call.

“We’re not defending,” Brown said. “You got to give these guys credit though, they are one of the best teams in the world.

Josh Giddey won’t play in Tokyo, but the NBL’s rookie of the year showed why he is likely to be one of the NBA draft picks after bagging 14 points, four rebounds and three assists.

“[We were without] four big pieces for us, but it gives the other guys an opportunity to play and step up,” Giddey said.

“It’s a lot of fun, being around the guys we’ve got, being able to compete against the competition that we do in every practice.

The Boomers can expect a much sterner test in their final hit-out, a rematch against Team USA on Saturday. Earlier on Wednesday Gregg Popovich’s team recorded a 108-80 win over Argentina.

“In the game against Australia, we competed well, rebounded, played D, ran the floor at good pace for a half and then it dissipated through the second half,” Popovich said.

“Tonight I thought we maintained that pretty much throughout the game.”

United fall to Sixers as finals battle gets closer