The Perth Wildcats have survived a massive scare to win the first game of their NBL title defence, beating an injury-plagued Melbourne United by a point at Perth Arena on Saturday. 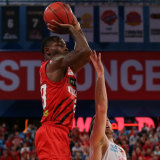 The Wildcats fought back from a 10-point third-quarter deficit to win 94-93, thanks to a late three-point dagger from Terrico White.

White, the hero in last season’s grand final series, had contributed only six points in three quarters. But that timely effort from outside the arc with 12 seconds left on the clock gave him 20 for the game, as his dominant final quarter condemned Melbourne to a 0-2 start to the season.

Melbourne’s task became a lot tougher before the tip-off. Captain Chris Goulding withdrew after the warm-up, an ankle injury he sustained in Thursday’s season-opening upset loss to South East Melbourne Phoenix preventing him from taking the court.

Yet after watching the Wildcats unfurl the championship pennant they won against them in the grand final, United quickly started to try to make amends for last season and their last outing.

With Casey Prather (thumb) and David Barlow (thumb) also on the sideline, Melbourne needed someone to step up in offence. Shawn Long duly obliged, with 13 points midway through the second term, as Melbourne led 42-35. Jo Lual-Acuil made the most of his extra court time also, dropping 11 points in the first half that finished with United in front 54-48. 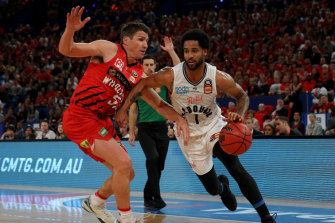 With Melo Trimble scoring regularly in the second half on his way to 26 points, United looked set to record their first win. But a flurry of fouls to Long, Alex Pledger and Tohi Smith-Milner during the third term came back to haunt them. Bryce Cotton top-scored for the Wildcats with 21.

United now take a break from NBL action to play against NBA sides the LA Clippers and Sacramento Kings. Their next game is at home against the Wildcats on October 20. Perth will host Illawarra on Saturday.

College Basketball Podcast: Duke’s Zion Williamson is something else