Home » Basketball » Court Report: It’s time to acknowledge the incomparable Ethan Happ as a National Player of the Year candidate

It’s been decades since a Division I college basketball player averaged 17.0 points, 10.0 rebounds and 5.0 assists.

Wisconsin senior Ethan Happ (18.5 points, 10.3 rebounds, 5.1 assists) can become the first Big Ten player to ever do it.

Happ, one of the best players in Badgers history, is having another fantastic run in his college farewell tour. Happ’s been so crucial and consistent, you can make an argument he’s been the most valuable and efficient player in college basketball.

Even ahead of Duke’s Zion Williamson.

In fact, KenPom.com’s Player of the Year formula almost does just that. Williamson is first, Happ is second — the two currently separated by one one-thousandth of a point. Yet Happ hasn’t had a lot of player-of-the-year chatter to this point. It’s about time that changed.

No. 24 Wisconsin (15-6) is surging, having won four straight after Tuesday night’s 62-51 road victory against Nebraska. It’s now up to No. 5 in adjusted defensive efficiency. Happ’s having close to a dream senior season by averaging a career-best almost every major statistical category. His assist rate is 38.9 percent, 10th-best in the country … as a 6-foot-10 center. The closest player in assist rate at 6-6 or taller is Cornell’s Josh Warren (6-8), who ranks 94th and assists on nearly 10 percent fewer (29.4) of his team’s possessions than Happ.

Happ is a unique weapon yet something of a fading ideal. He is a constitutional center thriving in a space-and-shoot world, one in which stretch 4s and stretch 5s are essentially required at the NBA level and have become more common throughout college basketball.

How then to explain Happ’s increasing role and dominance? Part of it is he was the right player for the right program. Only at Wisconsin could someone with a 1-of-16 career 3-point shooting mark be elbowing with Williamson for Player of the Year.

“My teammates got better, which helped me out, but another thing is the work that you put in every offseason,” Happ told me prior to the Nebraska win. “I think that was one my goals coming into college, each year taking a step forward and I think I’ve done that. That’s attributed to the time I’ve put in outside of the required practice and training sessions.”

The lack of a 3-point shot has been a bugaboo for Happ since he established himself as an NBA prospect in 2016-17. His bizarrely bad free throw shooting is also a glaring problem that could come to haunt Wisconsin in March.

“Those are the two things that 95 percent of the teams I worked out for talked to me about,” Happ said of the 2018 pre-draft process. “It’s something I’ve worked mentally on throughout the offseason and hasn’t paid dividends yet but I’m confident in my abilities.”

His inability to be a perimeter threat and his poor foul shooting unquestionably held him back from leaving Wisconsin early. What’s stranger: Happ has regressed at the foul line this season, shooting a career-worst 47.1 percent.

“It would be easier if I had smaller hands and my limbs weren’t as long, but there’s plenty of really good free throw shooters who have those things — big hands and long arms — so you can’t really chalk it up to that,” Happ said. “I’ve definitely tried several different things over the years and saw several different shooting coaches.”

Happ said he settled in on a technique early in the preseason, then abandoned it after his foul shooting failed him in games. Now he’s trying to nestle back into that former routine. What’s fascinating is how Happ didn’t figure to be so bad as a newcomer. In his redshirt freshman season, Happ made 32 of his first 41 attempts in his first 12 games (78 percent) but fizzled to 64.3 percent by the end of that season and has only gotten worse.

“It’s a big hurdle for me is being able to do it every time after changing for so many years,” Happ said, adding that it’s a rhythm issue as much as it is a mental one at this point.

Happ’s skill-set is fascinating because of how well he can handle the ball — it’s probably safe to say no college player 6-9 or taller has a more creative and assertive dribble — and how he passes from any spot on the floor. He is the vessel for Wisconsin’s offense. The team is going to look, and operate, in a different style without him next season.

Happ learned a lot of his dexterity and steady finesse from his dad, who grew up poor but loved basketball so much that he’d cut holes in his gloves just so he could practice dribbling on an icy makeshift court during the Illinois winters.

“I could never really take a day off if I wanted to be better than him,” Happ said. “That’s what the goal always was.”

His point-guard tutelage came to help him against some evolving prejudices over the term “center” and what it means now.

“I wouldn’t say that all centers need to be able to shoot,” Happ said. “There’s definitely cases in the NBA, Tristan Thompson, he’s a workhorse and very skilled. Draymond Green, even this year I’ve seen him not be able to shoot wide open 3s, but he’s an efficient passer. And even at his height, they sometimes play him at center.”

Happ’s cognitional capabilities, compounded with his stats, should get him drafted. Scouts will tell you he’s one of the best at identifying how defenses are playing him, be it doubles hitting hard off the catch, flaring off the dribble or over-committing to denials in the post. He wins in numerous ways and his stats usually improve in the final 20 minutes of games, once he and the Wisconsin coaching staff adjust.

It’s amounting to a potential First Team All-American season. Maybe more. The most overused line in college basketball the past three months is that there’s no one like Zion Williamson. That’s true, but the same can be said for Happ — and that’s been the case since well before this season began.

No team in a power conference had a more surprising run in January than Scott Drew’s Baylor Bears. This is a team that opened the season with a home loss to Texas Southern then fell at home in December to Stephen F. Austin and, as of Jan. 5, was 8-5 and careening to potentially missing the NIT.

But now Baylor’s won five straight, is 14-6 and would comfortably be in the NCAA Tournament field if assembled today. It’s the only team to score more than 1.0 points per possession vs. Texas Tech (No. 1 D in college hoops) this season. On Monday, Baylor smoked Oklahoma by 30 in Norman. It’s not just that Baylor’s turned its campaign around — it’s done so without its best player. Sophomore Tristan Clark’s season was officially over (left knee injury) as of Jan. 12. Baylor is 5-1 since then.

“We keep our lineups in erasable pencil,” Drew told me. “When Tristan went down, I said ‘uh-oh.'”

It’s a wonder Baylor is even at this point. It started the season with nine new players and just three returning scholarship guys, the lowest of any program in a power conference. This after BU had roster issues a season ago and missed the NCAAs. Drew told me he’s now forced to start 6-5 sophomore Mark Vital at “center.” Baylor is the smallest team in the Big 12 by far and yet it is, for the fifth consecutive season, rating as a top-10 team in offensive rebounding. Preposterous.

Drew said the only season that compares to this one in terms of being more surprising was 2009-10. That season Baylor made the Elite Eight as a 3 seed after being picked 10th out of 12 in the preseason. This season? Baylor was picked ninth out of 10. And now it’s tied atop the Big 12 standings with K-State.

“Still got a long way to go this year though,” Drew said.

While Baylor had the most surprising power-conference run of January, Louisville had the best. The Cardinals have gone 6-1 in the month of the wolf and are now 15-5 overall with a 6-1 ACC mark, putting them atop the league and snuggling with Virginia, Duke and UNC in the loss column.

Jeff Greer of The Athletic took a look at Louisville’s performance so far (better than expected). But here comes quite the grind. Louisville’s upcoming slate is a burden:

So three road games, and the two home tilts come against two of the three best teams in the conference. The Cardinals, fortunately, have some slack to give after accruing Quad 1 wins over Michigan State, North Carolina (road win), Seton Hall (road win) and NC State.

Houston and the history of first to 20 wins

Kelvin Sampson’s Houston Cougars — who we previously highlighted here at the Court Report — were the first team to 20 wins this season. Getting to 20 dubs before anyone else constitutes, surely, having one of the stronger teams in college hoops. But what does it mean for NCAA Tournament seeding and success? With the help of Ken Pomeroy’s research, we now know. Here’s how each team since 1996-97 has fared after beating the field to 20 victories.

Bill Self (Tulsa and Kansas), Mark Few and Roy Williams (at Kansas) are the only coaches to do it twice. So, what should Houston’s expectation be? Well, the average seed of the teams above is 2.6. Average finish in the NCAA Tournament: Sweet 16. Only one national champion, but also only two total flameouts. And the average record? An outstanding 32-4. KenPom.com projects Houston to enter the AAC tournament at 28-3, so it’s about on pace for the mean final record over the past two-plus decades.

Have a question, curiosity or complaint? Do @ me. Lob your question my way on Twitter.

Texas fans a bit too eager for this. Your team did just beat Kansas on Tuesday, after all. Smart will not be losing his post regardless of whether or not UT makes this season’s NCAA Tournament.

I’m not so certain that A&M will do that, Spencer. Let’s see where A&M is in a month. A source told me to keep in mind just how much money has been put into the football side. Jimbo Fisher’s deal is one of the most expensive in college football history. Getting rid of Kennedy and his staff would mean buying out for another $6-to-7 million. If A&M can steady itself, I could see him last another season.

It is the Big Ten, of course. The league has taken over the Big 12 atop the KenPom conference ratings, marking the first time since 2012-13 that the Big 12 hasn’t rated No. 1. And which league was No. 1 then? You guessed it: the Big Ten. The last time a non-Big Ten or Big 12 conference finished No. 1 in conference ranking was 2008-09: the Pac-10 did it! As for the Big Ten’s strength this season, I’m warming to the idea of nine schools from the conference getting a Dance ticket. 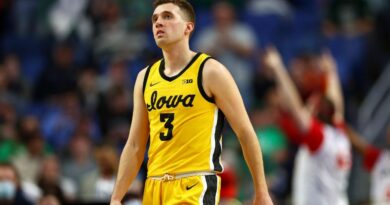 Cavs’ post-LeBron era gets even uglier