Phoenix Suns guard Devin Booker will miss Saturday’s game against the Memphis Grizzlies due to a strained left hamstring.

Booker suffered the injury in the third quarter of Wednesday’s loss to the Los Angeles Lakers.

The 21-year-old could also be in jeopardy of missing Sunday’s game at the Oklahoma City Thunder.

Booker watched Friday’s practice and said he wants to “feel normal” before returning to the lineup, but he is encouraged by how the hamstring is responding to treatment.

“I’m feeling better,” Booker told reporters. “Went home, slept and felt better the next day. Still not all the way there yet, though, so I heard it’s day to day, nothing serious, so that’s good.”

He is averaging 27.8 points and 6.8 assists through four games.

Booker, who has a 20-point average over 212 NBA career contests, signed a five-year, $158m extension in the offseason, which begins next season. Meanwhile, center Deandre Ayton (ankle) and forward Ryan Anderson (hip) are listed as questionable for the game against Memphis. 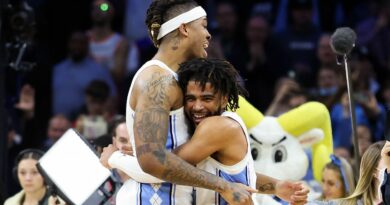 Ranking the top 25 players in the 2022 Final Four, assessing Most Outstanding Player race