Durant has not played since he injured his right calf on May 8 in the Western Conference semi-finals. He has missed the past eight games. 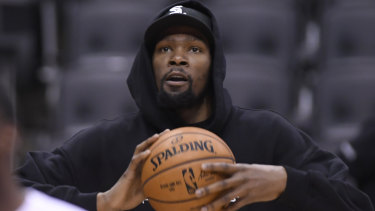 Kerr had better news when it came to Klay Thompson's strained left hamstring. Thompson didn't play in game three on Wednesday as the Warriors lost 123-109 to the Toronto Raptors, but Kerr said the star guard would play in game four "barring something unforeseen."

Kerr said he had hoped Durant could take part in a team scrimmage on Thursday but the training staff wasn't comfortable with that. He said Wednesday that he thought Durant would take part.

"There was no setback," Kerr said Thursday. "I was hoping today would be the day he'd get back on the floor. It's not going to be today."

In other injury news, Golden State big man Kevon Looney could see action in the NBA Finals, despite sustaining an upper-body cartilage fracture in the game two, according to a report.

Citing league sources, ESPN reported that further evaluation of the fracture led to hope of a return. More testing will be done to determine his status.

The team called the injury a non-displaced first costal cartilage fracture on Looney's right side.

A Looney return would bolster the short-handed Warriors but Kerr told reporters Tuesday afternoon that he didn't expect to see Looney on the court again this season.

"It's not anything that's going to be a problem long term," Kerr said of Looney's injury. "But it's going to keep him out for the rest of the series, which is obviously a big blow for us and for him."

During the regular season, Looney averaged 6.3 points and 5.2 rebounds in 18.5 minutes per game.

College basketball recruiting: Memphis beats out Kentucky for James Wiseman, the No. 1 prospect in the nation

NRL considers moving competition to Queensland amid coronavirus fears
We and our partners use cookies on this site to improve our service, perform analytics, personalize advertising, measure advertising performance, and remember website preferences.Ok