Coach Sandy Brondello says the Opals “want people that are committed to the program” and won’t let the absence of Liz Cambage loom over their FIBA Women’s World Cup campaign in Sydney next year.

Brondello admitted her side was still coming to terms with a disappointing Olympic campaign and a tumultuous lead-up involving an incident between Cambage and players on the Nigerian team in their lead-in game. As a result, Cambage withdrew from the Olympics, citing mental health issues. 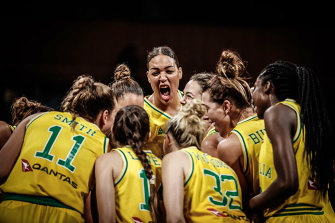 The Opals will be without star Liz Cambage going forward.

Brondello told The Age and Sydney Morning Herald Cambage had decided not to be involved and the Opals had to move on.

“Liz’s made her decision, so I don’t think it’s a hard one,” Brondello said on Wednesday.

“We respect that she’s made her decision. We want people that are committed to the program.

“To be good, you have got to be committed because you have to have teamwork, you’ve got to have chemistry and a cohesive unit.

“We’ve just got to go out there and play an exciting brand of basketball and make sure we’re talking about the other players that we do have, not the ones that are not there.

“Get the storylines right around the Ezi Magbegors, Sami Whitcombs, Bec Allens, Steph Talbots and Cayla Georges – there is a lot of really, really talented players and they’re obviously great people as well.”

Many Opals still won’t talk publicly about Cambage and the Olympic campaign and Brondello said she was continuing to talk with her players about how to move the team forward. The new WNBL season, which tipped off last weekend, is a key milestone for the Opals.

“It was a difficult situation that we all went through with COVID, our lack of preparation and then the situation with Liz – it just all built up and we didn’t achieve our goals.

“That’s tough. It still burns, but we’ve got to use that for motivation. It’s been a long time since they have played, getting back to the WNBL and enjoying playing – that helps. Then you are just reaching out.

“It’s a new chapter and that’s how we look at it. It’s a World Cup on home soil. We have a talented group and we have to make sure we come together, play hard and play the Opals way.

“We will have the right kind of preparation. Rebuild a bit of what we lost and get them feeling good. Any time you put the green and gold on, it brings back that good feeling.”

For the first time in more than 20 years, the Opals are without a superstar figurehead. Cambage put on an all-tournament performance in the team’s silver medal campaign at the 2018 World Cup in Spain, and before that Lauren Jackson took the team to multiple Olympic medals and world championships gold. Jackson and Cambage played together as the Opals claimed the bronze medal in London in 2012.

Brondello aims to have the Opals play “15 or more games” before the World Cup, including the four games in their World Cup qualifying tournament in Belgrade in February.

The Opals are automatically into the World Cup but will play in qualifying to help with their preparation. Brondello plans to have at least one tour, if not two, plus lead-in games.

“We will try to get as many games as we can because while training is important, the games will allow us to tweak things,” Brondello said.

“Before the last World Cup, we went to France and got flogged. It allowed us to improve and that is the only way.

“You may lose a few games, but that’s how you learn and hopefully at the World Cup is where we peak. We have to be excited about the challenge ahead of us.”

The FIBA Women’s World Cup will be played in Sydney from September 23 – October 3 next year.

NBA: Warriors blown out by Thunder 120-92 to begin season with two losses, Grizzlies edge out Nets in OT

Russell stars as Southside Flyers strike Lightning down for double