A one-time Cairns Taipans import did his bit to put Turkey within seconds of a huge upset of the United States, while Greece were also toppled on a dramatic day three of the men's basketball World Cup in China.

The two-time defending champions ground out a dramatic 93-92 overtime win against Turkey in Shanghai on Tuesday, while Brazil shocked Greece 79-78 and the Dominican Republic stunned Germany 70-68. 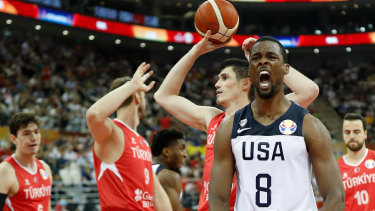 Taken to the limit: Harrison Barnes of USA reacts after a clutch basket against Turkey in Shanghai.Credit:Getty Images

Turkey came agonisingly close to staging the shock of the tournament but missed four successive free throws in the final 10 seconds of the contest before Chris Middleton sank both his shots from the foul line with two 2.1 second left.

The Americans, who lost to Australia in the lead-up to the tournament, were able to breathe a huge sigh of relief after Turkish forward Ersan Ilyasova's off- balance shot on the buzzer fell short.

American-born, naturalised Turkish point guard Scottie Wilbekin, who led the Taipans to the NBL finals four years ago, had 12 points and three assists as he went play-for-play with Kemba Walker in overtime.

A demolition looked likely after the United States raced into a 10-2 lead but the Turks roared back and kept breathing down their opponents' necks before they nosed ahead 81-79 with 12 seconds left in regular time.

Jayson Tatum hit two of three free throws to force overtime, where Turkey appeared to have done enough after a blatant foul by Joe Harris with 10 seconds left gave them four successive free throws when they were 92-91 ahead.

Much to the disbelief of their bench and the Shanghai crowd who roared Turkey on from the start, Dogus Balbay and Cedi Osman missed all their shots from the foul line before Middleton forced the final twist.

Meanwhile, Greece face a decider against New Zealand to advance from their preliminary pool while Brazil booked their last-16 berth after Anderson Varejao racked up 22 points and nine rebounds for the South American side. 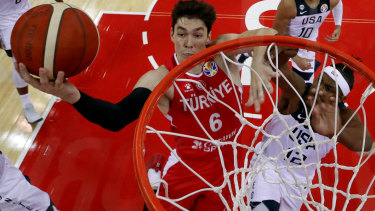 The Greeks missed a chance to force overtime as Kostas Sloukas missed one of three free throws with two seconds left while Giannis Antetokounmpo, last season's most valuable player in the NBA regular season, was held to 13 points.

New Zealand kept alive their hopes of advancing with a 93-83 defeat of Montenegro as Corey Webster scored 25 points and towering centre Isaac Fotu added 20, while Australia breezed to an 81-68 victory over Senegal.

The Czech Republic will battle it out with Turkey for a spot in the second group stage after an 89-76 win against Japan while France hardly broke sweat in a 103-64 rout of Jordan.

The top two teams from each of the eight preliminary pools will advance to the second group stage.

Breaking down the best of the 2019 recruiting class