If you take one look at Iowa star player Luka Garza, you’re going to immediately notice his eyebrows.

They’ve become a topic of conversation as Garza continues to dominate on the court. The two-time Sporting News Player of the Year even has a Twitter account dedicated to his eyebrows. Not since Anthony Davis have wee seen eyebrows captivate college basketball fans like Garza has.

Just look at those bad boys.

Garza is actually aware of the commotion his eyebrows have caused. Speaking with Barstool Sports’ “Bench Mob” podcast, Garza explained the lore behind the brows.

“I started hearing a lot of feedback about my eyebrows once I started kind of getting bigger and bigger. Especially the NCAA Tournament in my sophomore year was the worst,” Garza said. “After the game I check in and see all these memes and everything’s about my eyebrows. Nothing about how I played or anything like that.”

And these eyebrows didn’t come by accident. Garza says he maintains the look of his brows.

Garza says he’s also gotten his eyebrows waxed to make them look as good as possible.

“It makes it a little easier, because plucking them can be hard and it kind of hurts,” Garza says about waxing. “So I’ve done it before, and it was nice.”

Since Garza says he’s improved his eyebrow routine over the years, let’s see if there are any noticeable differences in his brow appearance.

Notice how older Garza (left side) has that weird part in his eyebrow. Current Garza would never allow that to happen. Look how stable and firm current Garza’s eyebrows are. Those things aren’t moving at all. Although it doesn’t look like old Garza was in any danger of a unibrow. 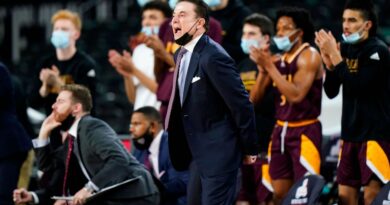