The top seed in the SEC Tournament lost its first game.

Florida guard Andrew Nembhard knocked down a go-ahead 3-pointer with less than three seconds to play to give his team a 76-73 win over No.9 LSU on Friday.

The Tigers led by as many as 13 early in the second half but failed to hold on. Here are three takeaways from their loss:

The Gators entered the matchup against LSU projected by CBS Sports to be one of the last four teams in the field of 68. With the victory, they should avoid Dayton and further solidify their spot in the bracket.

Florida improved to 19-14 and the win over the Tigers is its best of the season. The Gators will now not have to worry about hearing their name called Selection Sunday.

The committee will have a lot to think about with LSU

The Tigers will certainly reach the NCAA Tournament. Where they will be seeded, however, is anyone’s guess.

LSU won the SEC regular season title and had a chance to climb up to a No. 1 seed if it ran the table this weekend. That will not happen now.

The Tigers seemed like they’d drop no lower than the two line. But their off-the-court issues, including the indefinite suspension of coach Will Wade, and an early exit from the SEC Tournament could push them down further.

Naz Reid back on track

LSU can take at least one positive away from its loss Friday. Naz Reid appears back on track.

The freshman forward missed the Tigers’ regular-season finale with a minor injury and had shot just 16 of 45 from the field in his last four appearances.

Reid, however, was the best player on the floor against Florida. He finished with 26 points, 14 rebounds and hit three of his four 3-pointers in the losing effort.

In order to make a deep tournament run, the Tigers will need Reid to continue to play up to his potential.

Bracketology: With Arizona just out of the NCAA Tournament bracket projection, the Pac-12 is down to just two bids 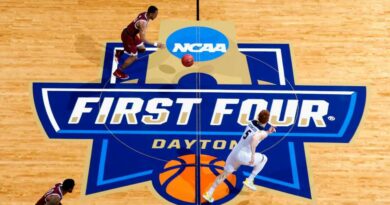 What is the First Four in March Madness? Explaining the NCAA Tournament play-in games