As he witnessed his side's 15-4 run to start the third quarter of Thursday night's win over Australia, USA guard Donovan Mitchell had one thought.

Mitchell had five points during that run and it proved the match-winning moment in what became a 102-86 win over the Boomers in front of 51,218 fans at Marvel Stadium.

But the USA know they have much more improvement to come considering this team has never played together before this campaign which is coach Gregg Popovich's first as USA coach.

The two sides play again at Marvel Stadium on Saturday in the second game of their two-game series ahead of the FIBA World Cup in China that tips off on August 31.

Mitchell, who had 13 points and two steals, said he was excited about the development in his side.

"We feel like we can be unstoppable if we can play like that for 40 minutes," Mitchell said of the third-quarter run.

"We want to build and build upon that. I'm not saying we are there yet, we have a long way to go to get there, but we are in good shape."

The USA look at teams such as Australia, Spain and Serbia who have core groups that have played over multiple Olympics and World Cup campaigns and they know they don't have that same understanding.

But they are doing all they can to catch up and to use their pressure defence and athleticism to make up the difference.

"You could feel that chemistry they have with each other," Mitchell said of the Boomers. 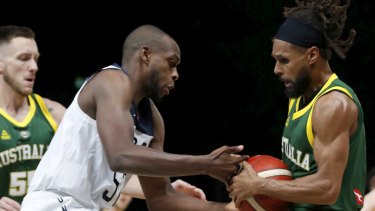 The USA’s Kris Middleton is stripped of the ball by Australia’s Patty Mills during game one at Marvel Stadium on Friday night.Credit:Darrian Traynor

"That movement off the ball, that behind the back pass from [Andrew] Bogut.

"We have guys who are just starting to play with one another. That second half was where we picked it up defensively and we did what we had to do."

While Mitchell and Team USA walked away happy, the Boomers identified major concerns with their defensive aggression and their offence in the second half.

"As much as you hate to say it, our offence dictated how badly we played defence which shouldn't be the case," Boomers captain Patty Mills said.

"We want to be able to hang our hat on the defensive end. A couple of bad shots, bad offensive plays where we didn't really move the ball led to rebounds, runouts and then dunks or threes [from USA].

"The defensive side of all about sitting down and playing some good hard team defence which we showed for patches tonight. We will get more consistent with that the more we play and, hopefully, be right for game one in China."

It was noticeable Boomers coach Andrej Lemanis rotated his starting five and first three bench players for the first half in which the USA held a 44-43 lead at half-time before running a much broader rotation of all 11 available players in the second half.

The Boomers will be better for the run against the USA, who clearly showed they are still the World Cup favourites despite missing a host of NBA All-Stars and Boomers power forward David Barlow is expected to be available for Saturday after sitting out with a minor back issue.

Younger Boomers such as Jock Landale (10 points) will also be better for the run against the USA side with finding himself pressured into missing some easy shots.

"You almost feel a little intimidated going in," Landale said.

"Those guys are all NBA stars and play with the best guys in the world but once you settle in you realise, 'Damn, these guys are just another group of basketball players'.

"Next game we will be a lot more prepared for that and that initial punch. We'll come out ready."

The Boomers play Team USA at Marvel Stadium on Saturday at 2pm, with SBS Viceland showing the game live.

For 3: What happened to Virginia, and are Buckeyes’ Big Ten’s best?

Barcelona 'consider swap with Vidal, Rakitic or Umtiti for Martinez'