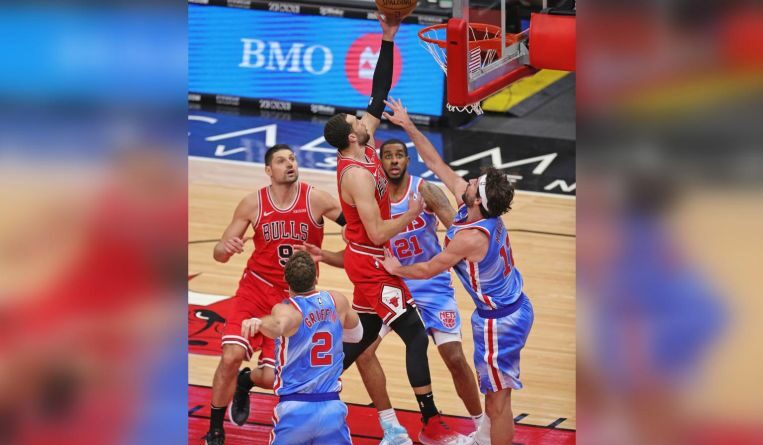 CHICAGO (Reuters) – The Chicago Bulls halted a six-game losing streak and breathed life into their playoff hopes by handling a Brooklyn Nets lineup that was missing James Harden and Kevin Durant in Chicago.

The Nets, who had a four-game winning streak snapped, looked lethargic and out of sync playing without Harden and Durant, who continue to nurse hamstring injuries.

In their 115-107 victory over the Nets, the Bulls got a game-high 25 points from Zach LaVine and a strong effort from Tomas Satoransky, who added 19 points and 11 assists. Nikola Vucevic contributed 22 points and 13 rebounds for Chicago, while Kyrie Irving led six Nets in double figures with 24 points and a season-high 15 assists.

Over in Los Angeles, the battle between the city rivals turned into a lopsided affair as the Clippers clobbered the Lakers 104-64.

The Clippers never trailed, starting the game on a 13-2 run and leading by as many as 24 points. Swingman Marcus Morris Sr. led the charge, with 17 of his game-high 22 points in the first half. Kawhi Leonard totaled 19 points, 10 rebounds and eight assists. Paul George contributed 16 points and seven rebounds, while Luke Kennard chipped in 15 for the Clippers.

The Clippers snapped a two-game home losing streak. They also won the earlier matchup of the season between the two L.A. teams, a 116-109 decision in the season opener on Dec 22.

A 19-4 run to open the second quarter, kicked off when Romeo Langford knocked down one of Boston’s 21 made 3-pointers on the night, turned a one-point deficit into a lead that never dipped below eight for the rest of the way.

The Celtics closed the period on a 9-2 run to finish the period with a 33-17 edge, then carried the momentum into a 40-27 third quarter. Tatum closed the third with a buzzer-beating 3-pointer.

In Philadelphia, Dillon Brooks recorded 17 points to lead seven players in double-digit scoring as the visiting Memphis breezed to a 116-100 victory over the 76ers.

Jonas Valanciunas collected 16 points and 12 rebounds to notch his career-high-tying 10th consecutive double-double for the Grizzlies, who erupted for 45 points in the third quarter. Memphis, which has won three of its past four games overall, completed a season sweep of Philadelphia after posting a 106-104 win over the 76ers on Jan 16.

Tobias Harris scored 21 points, 13 in the first half, and Shake Milton added 14 off the bench for Philadelphia, which played without Joel Embiid. The four-time All-Star centre was given the night off after he returned from a 10-game absence due to a bone bruise in his left knee during the 76ers’122-113 victory over Minnesota on Saturday.

The game between Atlanta Hawks and Golden State Warriors saw Danilo Gallinari and Clint Capela combining for 49 points and 28 rebounds as the Hawks defeated visitingWarriors 117-111 for its third straight win.

Gallinari, playing with an ailing left Achilles, had 25 points and 10 rebounds, and Capela had 24 points, 18 rebounds and two blocked shots to help the Hawks sweep the two-game season series against Golden State for the first time since the 2010-11 season.

Golden State lost its third straight game despite a 37-point effort from Steph Curry, who returned after missing the last game with a tailbone contusion.

Curry went to the locker room at the third-quarter break and did not re-enter the game until 6:15 remaining. He was only 3-for-12 on 3-point attempts.

Ball, who missed the previous seven games with a hip injury, paired 27 points with nine assists to lead the Pelicans – who were without forwards Zion Williamson and Brandon Ingram. Six of his teammates also scored in double figures.

Down the stretch, multiple hands played a role in keeping the Rockets at bay, with Wes Iwundu and Naji Marshall drilling timely three-pointers while Willy Hernangomez converted in the paint for New Orleans. Hernangomez had 15 points and 12 rebounds off the bench, while Eric Bledsoe scored 19 points and James Johnson added 18.

Over in Denver, Aaron Gordon scored 24 points against his former team, Jamal Murray had 22, and host Denver rallied from 18 down to beat Orlando 119-109 on Sunday night.

Nikola Jokic had 17 points, 16 assists and nine rebounds, Michael Porter Jr. finished with 20 points and 12 rebounds, Will Barton scored 15 points and Monte Morris had 10 points off the bench for Denver.

Gordon’s dunk and Porter’s putback gave Denver a 105-102 lead with 3:37 left in the fourth quarter. Okeke hit a layup but Murray made two free throws and a 3-pointer to put the Nuggets ahead 110-104 with 2:25 left. Hampton and Carter airballed two 3-point attempts, allowing Denver to score five straight to go ahead by 11, and the Nuggets closed it out.