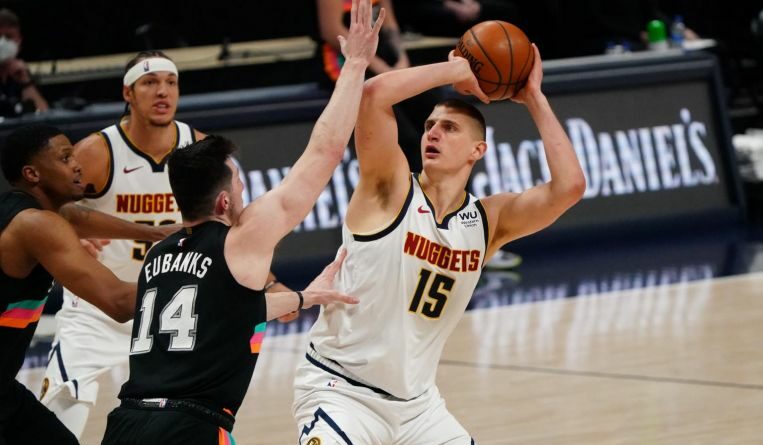 (REUTERS) – Nikola Jokic finished with 25 points, 10 assists and nine rebounds to help the surging Denver Nuggets to a 106-96 victory over the visiting San Antonio Spurs on Wednesday (April 7) in the first of a two NBA games in three days mini-series.

The National Basketball Association game was the second of a home back-to-back for the Nuggets, who rolled past Detroit on Tuesday, and they looked the worse for the wear early on.

Denver trailed late in the second quarter before finding their stride, opening up a huge lead midway through the final period and winning their seventh straight contest.

Michael Porter Jr added 18 points and 10 rebounds and Will Barton hit for 14 points for Denver.

Dejounte Murray and Derrick White led the Spurs with 18 points each, with DeMar DeRozan scoring 14 and Patty Mills adding 12 off the bench. San Antonio have lost four consecutive games and nine of their past 11.

In another game, Devin Booker and Chris Paul led the Phoenix Suns to a 117-113 overtime win over the visiting Utah Jazz in a game between the NBA’s two best teams that lived up to its billing.

Booker scored 35 points and Chris Paul contributed 29 points and nine assists as the Suns, who have the second-best record, held on for their seventh victory in a row. Booker got the Suns off to a quick start in OT with a lay-up, and Paul finished it off with free throws late in the extra session. Utah never led in overtime.

Deandre Ayton also had a strong showing with 18 points, 12 rebounds and three blocks for Phoenix, which picked up their second win in two meetings with the Jazz this season.

Porter and Jokic hit 15 points apiece to pace Denver at half-time as the Nuggets outshot San Antonio 50 per cent to 42.6 per cent. Thirty-six of Denver’s points in the half came in the paint.

DeRozan, Murray and White each scored 10 points to lead the Spurs in the first half.

San Antonio got a bucket from Mills to open the fourth quarter, but the Nuggets scored the next nine points and assumed a 90-76 lead that was never challenged.

Denver coach Michael Malone was ejected from the game for arguing a non-foul call at the 5:32 mark of the second quarter with the Nuggets ahead 42-41.

Against the Suns, Donovan Mitchell registered 41 points and eight rebounds for the NBA-leading Jazz, and he forced overtime with a clutch three-pointer late in regulation.

Bojan Bogdanovic scored 20 points and Rudy Gobert tallied 16 points and 18 rebounds for the Jazz, who have lost two in a row on the road after a nine-game winning streak.

Phoenix’s offensive rebounds (16) and the Jazz’s poor three-point shooting (11 of 44) were key factors on a night when every possession mattered.

Meanwhile, Kevin Durant played for the first time in nearly two months and was one of seven Brooklyn players to score in double figures in a 139-111 rout of the visiting New Orleans.

Durant, who last played on Feb 13 and missed 23 consecutive games because of a hamstring injury, did not enter the game until the second quarter was nearly half over. He scored 17 points, making 5 of 5 field-goal attempts, 2 of 2 from three-point range and 5 of 5 free throws in 19 minutes.

Kyrie Irving led the Nets with 24 points, and LaMarcus Aldridge had 22. Eric Bledsoe led the Pelicans with 26 points despite being ejected late in the third quarter. Zion Williamson scored 16 points on 4-of-12 shooting to end his streak of 25 consecutive games with 20-plus points on 50 per cent shooting or better.

And Marcus Smart hit the tiebreaking three-pointer with 36.4 seconds left, and scored 14 of his 17 points in the fourth quarter as hosts Boston snapped a seventh-place tie in the Eastern Conference by coming back to beat New York 101-99.