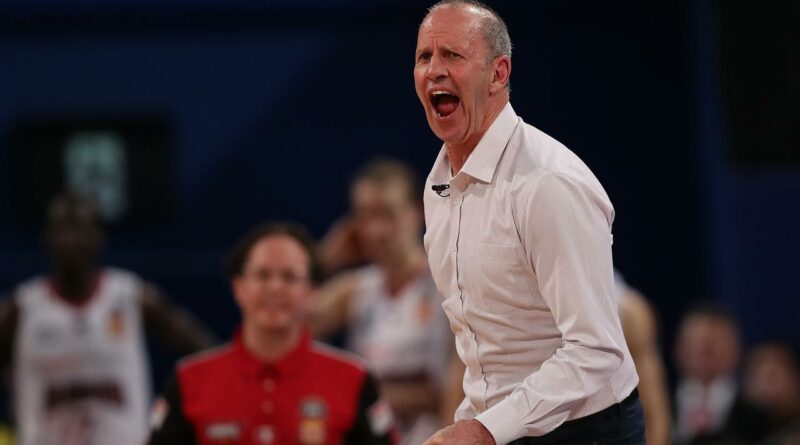 NBL master coach Brian Goorjian is one win away from completing his finest achievement by guiding the cash-strapped Illawarra Hawks from last place to a grand final series.

Goorjian’s Hawks will book a berth in the decider if they defeat defending champions, the Perth Wildcats at a packed WIN Entertainment Centre on Saturday.

Illawarra’s formidable position comes after the franchise recorded just its second win in Perth from 36 attempts on Friday night.

The thrilling 74-72 win puts the Hawks in a strong position to seal the semi-final series over the Wildcats.

It’s an incredible resurgence for Illawarra given the club was placed into voluntary administration for the second time in franchise history last year.

NBL master coach Brian Goorjian primed to fulfil one of the league’s finest turnarounds with the Illawarra Hawks. Photo: Will Russell/Getty Images.Source:Getty Images

For Goorjian, who has won a record six NBL championships, his role in the Illawarra’s remarkable rise has him feeling enthused like a rookie mentor.

“I’m just so excited to go back to Wollongong,” said 67-year-old Goorjian.

“We talked a lot this year about saying that talk is cheap.

“People asked what the new franchise and ownership is going to be like, but we’ve dealt with Covid, and we’ve got a brand-new team.

“I’ve always said I didn’t know how we’d go, but we were going to scrap and fight and represent the community and they are going to be proud of the team.

“This is a team that long-term the community is going to be proud of.”

Goorjian may be on a high, but from experience he knows Illawarra must maintain its energy and effort against a desperate Perth side in Game 2.

“(Our first win) means nothing unless we win the next one at home,” he said.

“We want to win the series.

“I know the history against Perth, but this is a whole different franchise and organisation and we felt good about ourselves coming in.”

The Hawks take on Perth in Game 2 of their semi-final series at the WIN Entertainment Centre from 5.30pm on Saturday.

New Wake Forest coach Steve Forbes on Deacons in transfer portal: They’ll have to tell me no