The NBL could start its season with all nine teams playing at Melbourne Arena, after the Australian Open tennis tournament, as talks intensify with the Victorian government.

NBL officials are confident Melbourne will be functioning well enough to host a basketball hub in Victoria, potentially following the Australian Open in late January. 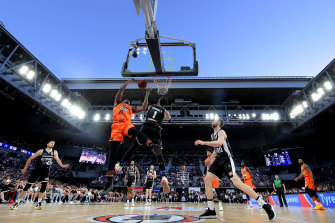 Melbourne Arena could be part of an NBL bubble next season. Credit:Getty Images

NBL sources say the league also has interest from the NSW government and it hasn't ruled out having two hubs or using NSW as a sole base if that proves the best option.

But NBL chief executive Jeremy Loeliger signalled on Thursday that the league has its sights on Victoria as the state authorities want to start locking in events for its COVID normal "summer like no other" following the second lockdown.

"The NBL is absolutely confident that Victoria would be able to host our clubs in a hub if that's what we decide to do this season," Loeliger said.

"Having had some very positive talks with the Victorian government, we are very confident that they are well on the way to preparing the state to be open for business by the new year, and that sport and major events are going to play an important role.

"We are seeing transmissions numbers coming down and see no reason why Victoria wouldn't be in as strong a position as anybody else to host a hub if that's ultimately what we need."

The NBL also hasn't ruled out making use of regional Victoria as Bendigo and Ballarat have both recently updated their stadiums and showcourts, while outer suburban Melbourne venues like the State Basketball Centre and Dandenong Stadium also have much to offer.

Bendigo and Ballarat hosted the NBL Blitz in 2018 and have existing relationships with the NBL.

"Victoria prides itself as the home of basketball in Australia and its credentials extend well beyond metropolitan Melbourne into regional Victoria where restrictions are already being eased and there are some fantastic basketball venues that could be utilised," Loeliger said.

The CEO said the safety of players and officials was paramount and any decision on a hub location would be dictated by that.

"The health and safety of players, staff and fans is paramount but the concept of a hub also provides us with a great opportunity to start our season with some certainty and also meet our aim of making games accessible to as many fans as possible," Loeliger said.

"The NBL has enjoyed huge growth in recent seasons and we want to maintain that momentum notwithstanding the challenges all sports are facing."

Maker comes up big for Detroit in NBA win

Football: Pep Guardiola has no complaints despite missing out on Lionel Messi