Home » Basketball » ‘Never seen anyone like him’: Duke’s Zion Williamson will shake up college basketball

A 6-6, 280-pound earthquake is about to shake up college basketball. Duke freshman Zion Williamson has the power and grace of LeBron James, the leaping ability of Odell Beckham Jr., the charisma of Shaquille O’Neal and the feet of Mikhail Baryshnikov.

National TV viewers will get one of the first glimpses of the freakishly talented Williamson on Tuesday night as Duke opens its 2018-2019 season vs. Kentucky at the Champions Classic in Indianapolis (ESPN, 9:30 p.m. ET).

But Bilas, a former Blue Devils star himself, has already witnessed him dunk from the foul line, among other feats.

Before he has even played a regular-season game, Williamson is the biggest star in college basketball, Bilas says. He could be the type of crossover star who draws TV viewers the way James and Stephen Curry do in the NBA, or how Beckham and young Chiefs quarterback Patrick Mahomes do in the NFL.

“I’ve never seen anyone like him. I know a number of fans are aware of him. They’ve seen him on Instagram and YouTube because he’s a sensation,” Bilas told Sporting News. “When he takes the stage … he’s not going to give it up. He’s going to be ‘SportsCenter’ Top 10 every game. People will get to the game early to watch him in warmups. He’s ridiculous. I’ve never seen an athlete like him.”

If that’s not enough to showcase the Williamson phenomenon, simply look at his Instagram account, which boasts 1.8 million followers. Consider some of the coverage of the burly young star:

Bilas isn’t the only one heaping praise and hyperbole on Williamson, either.

— ‘It’s not even fair’: Williamson, who’s almost certain to be one-and-done at Duke before moving on to the NBA, is like a man among boys at the college level, according to ESPN. He jumps so high that when he slams home a dunk, he’s coming downward.

“The NBA scouts mostly sat quietly as they observed the action on the floor. That was until five-star prospect Zion Williamson, a basketball phenom who boasts 1.8 million followers on Instagram, caught a rebound, hovered seemingly for a few seconds with his forehead near the top of the backboard and threw the ball through the rim,” wrote Myron Medcalf of ESPN.

“It wasn’t a dunk. It was the same maneuver a child uses when he slams a wad of bubble gum that’s lost its flavor into a trash bin. But this was a 10-foot rim. And the muscular 6-foot-6, 272-pound Williamson did this in traffic against elite NBA prospects, which prompted some of the typically composed pro scouts to gasp and shake their heads. ‘It’s like,’ one NBA scout said then, ‘it’s not even fair.'”

— Dunking from the free throw line: Williamson would be the second-heaviest player in the NBA. But he can also fly, noted CBSSports.com.

“Skepticism was plentiful last month after Duke released its official roster and listed five-star freshman Zion Williamson, arguably the most athletic player on the team, at a gigantic 285-pounds” wrote Kyle Boone. “It’s safe to say now, however, that any belief he may have lost some of his athleticism despite adding weight to his frame was a bit premature. During practice in Toronto as the Blue Devils prepare for an exhibition tour across Canada, Williamson said “Hi” to his haters by easily slamming down a jam … from the free-throw line.

— All hail ‘Zanos’: Williamson’s physical attributes seem so superhuman that his Duke teammates have nicknamed him “Zanos,” after the Marvel Comics villain Thanos.

“Williamson is part of a star-studded Blue Devils’ recruiting class that’s also highlighted by RJ Barrett, the potential top pick in the 2019 NBA draft, and Cameron Reddish. He’s different, however, not only from those two highly regarded prospects, but also pretty much any player in the country. He’s showcased a combination of size, power, athleticism, explosiveness and jumping ability that will make him must-see TV for the 2018-19 college basketball season,” according to Tim Daniels of Bleacher Report.

“‘Zanos’ and Co. kick off the regular season Tuesday with the Champions Classic against the fellow national contender Kentucky Wildcats. It’s a spotlight matchup that could come straight out of a Marvel comic book, with Williamson and his Thanos-like superhuman strength playing the lead role.”

Watching him in person up in Canada during exhibition season, Bilas admitted it was hard to wrap his head around what he was seeing on the court. 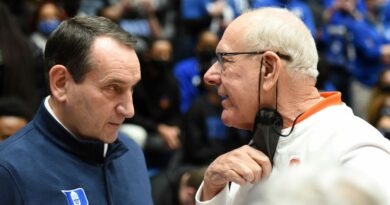 How 2022 Duke compares to past title teams, and Syracuse’s chances for a late surge 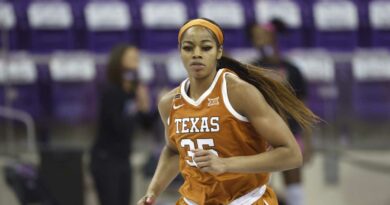 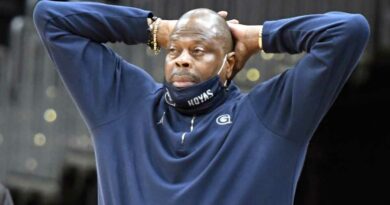 Patrick Ewing has harsh words for Georgetown players after blowout loss: ‘We did not compete’