The Australian Opals will take nothing for granted as they look to lock in a place for the Tokyo Olympic Games this week.

The Opals face India, Chinese Taipei and Japan in a FIBA pre-qualifying tournament in Malaysia starting on Thursday. 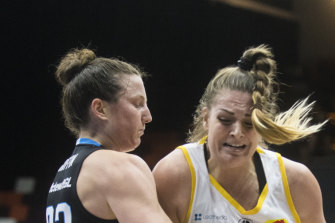 Japan will have direct entry to the next round as they are the Olympic host nation, so the Opals have to finish ahead of the other two opponents to secure their spot.

Ideally, they want to win all three games and give themselves the best possible seeding for Olympic qualifying next February.

Opals coach Sandy Brondello has named her strongest possible roster for the tournament, bringing centre Liz Cambage back to the side along with veteran centre Marianna Tolo, who hasn't played for the national team in over two years due to injury.

Outside of Poland-based forward Rebecca Allen and WNBA star Cambage, the rest of the Opals completed their WNBL commitments this weekend before flying to Malaysia on Sunday.

Centre Cayla George said she looked forward to being back in national colours with Tolo, who has enjoyed a decorated career when not battling repeated knee problems.

George (Melbourne Boomers) and Tolo (Canberra Capitals) were WNBL opponents on Saturday, with the Capitals claiming a 79-76 win. Now, they are teammates again.

"Liz is such a presence, we all know her and what she can do but Tolo has been out for two years with injuries," George said.

"I've known her since I was at the AIS, there is some great history and I'm so happy she is finally injury-free and back in the fold.

"She can really make her mark with this Opals team.”

The Opals are expected to win by sizeable margins against India and Chinese Taipei but have lost to Japan in recent meetings, so are keen to beat the Olympic hosts as well.

"It's really exciting to get Liz and Tolo back and go into these games with such a strong side, we want to win all three and put ourselves in the best possible place for the qualifying tournament," George said.

"That Japan game will probably be our toughest opponent, but we definitely respect all opponents going in and play hard like the Opals do."

New Zealand will host the other Asian pre-qualifying tournament facing China, Korea and the Philippines, with the top two going onto the tournament.

The WNBL will pause until November 22 while the tournament is played. The Southside Flyers sit on top of the ladder with a 6-1 record, with the Capitals second on 5-2. The Boomers (4-2) are third.

The Opals play Chinese Taipei on Thursday, India on Saturday and Japan on Sunday in Malaysia with all games at 7pm AEDT. Basketball Austalia could not say whether the games would be televised or available on YouTube when contacted on Sunday afternoon.

Kentucky coach John Calipari says he is ‘overrated as a recruiter’

Kane or Son? Our Premier League POWER RANKINGS after an epic weekend
We and our partners use cookies on this site to improve our service, perform analytics, personalize advertising, measure advertising performance, and remember website preferences.Ok