Ben Simmons is drawing high praise for his growing leadership of the Philadelphia 76ers during the NBA playoffs.

Philadelphia have won three straight games against the Brooklyn Nets and need one more win to reach the second round and a likely match up against Kawhi Leonard and the Toronto Raptors. 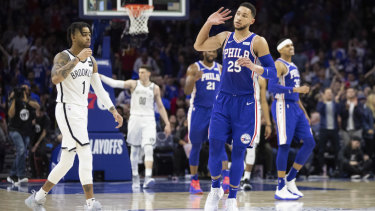 Ben Simmons is impressing his teammates.Credit:AP

Simmons has been instrumental to the Sixers rebounding from a disappointing game one defeat, averaging 21.3 points and 9.7 assists during Philadelphia's winning streak in the feisty series.

Teammates are taking notice of the young Australian's increasing influence.

"Ben is out there leading this group," the Sixers' four-time All-Star Jimmy Butler said.

"He is our point guard and he is running everything because he is so smart and he knows how to get guys the ball in positions where they can score."

While Simmons has impressed offensively, the best part of his performance has come on the defensive end, according to teammates.

Simmons has been tasked with defending D'Angelo Russell and has used his size and athleticism to restrict the Nets' All-Star point guard to a disappointing 39 per cent shooting from the field.

"Ben has done a tremendous job defending D'Angelo and contesting every single three that he has taken," Butler said.

"Ben is incredibly confident within himself," Brown said.

"He has put in a tremendous amount of work in addition to being pretty damn good, so I am just so happy for him to play like he has played."

Simmons has joined Oscar Robertson and Magic Johnson as the only players to record at least 200 points, 100 rebounds and 100 assists through their first 14 NBA playoff games.

His individual performance places Simmons among NBA royalty but the 22-year-old is solely focused on winning games during the most important time of the season.

"I feel that everybody has the same mindset here and we want to win," Simmons said.

"I know we have the pieces to do it and it's going to be tough but we are together."

Philadelphia can eliminate Brooklyn with a victory on Wednesday (AEST) and Simmons is expecting the Nets to be desperate as they fight to save their season.

"We have to keep the same mentality in game five as the last few games we have played," Simmons said.

"It's going to be one of those games where we have to stay tough, stay with it and stay together."

Toronto are 3-1 up in their series against Orlando Magic and aiming to clinch it on Wednesday (AEST).

College basketball recruiting: Memphis beats out Kentucky for James Wiseman, the No. 1 prospect in the nation

Poll Attacks: One AP voter moved Houston up and into the top 10 after loss to Temple 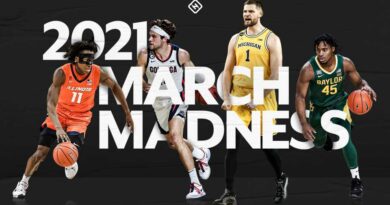