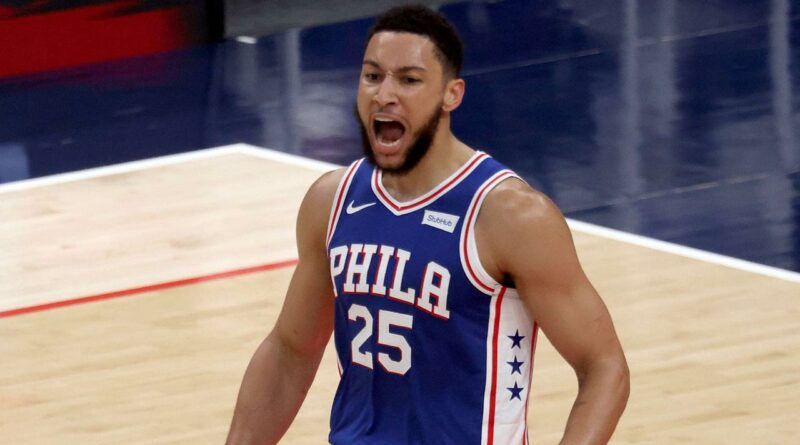 Australian NBA star Ben Simmons has been urged to improve or get subbed as rival teams are being encouraged to deliberately foul the Boomers guard due to his struggles from the free-throw line during the playoffs.

Simmons’ free-throw battles continued in Philadelphia’s 122-114 loss to the Washington Wizards on Tuesday, with the Wizards using the old “hack-a-shaq” technique – a reference to notoriously awful free-throw shooter Shaquille O’Neal -– as a gamesmanship tactic.

The Boomers guard shot five from 11 from the penalty stripe against the Wizards, while he is now five from 20 (25 per cent) in just four games this post-season.

As a result, Washington players purposely fouled Simmons, knowing the high chance of him missing his free throws.

Rivals were encouraged to deliberately foul Australian star Ben Simmons due to his struggles from the free-throw line. Picture: Rob Carr/Getty Images/AFP.Source:AFP

ESPN commentators also backed the move to foul the Australian star as a gamesmanship move.

If Philadelphia wants to go deep in the playoffs, they need Simmons to dramatically improve his free-throw shooting.

Rival teams will only continue to foul the Melbourne-born guard knowing his struggles to convert from the stripe.

Well-known American sports columnist and commentator Skip Bayless took to Twitter to express his concern about Simmons’ failings from the free-throw line.

“76ers coach Doc (Rivers) can’t take him out – he’s a star, a defensive force. Doc would risk losing him psychologically. But Ben eventually must learn how to make 70% of his FTs under pressure. Or get subbed.”

Ben Simmons is brilliant, but he needs to improve his free-throw shooting to become an even better player. Picture: Tim Nwachukwu/Getty Images/AFP.Source:AFP

Philadelphia-based sports writer Mike Sielski added: “You can love the other aspects of Ben Simmons’ game. I love them, too. But the free-throw shooting — the shooting in general — is a thing. And a good opponent can exploit it in a playoff series.”

Sports writer Cedric Golden wrote: “Legitimate question: how can a player of Ben Simmons’ talent be so inept at the line? Does he not put in the work in the off-season? This hack-a-shaq is embarrassing. My old butt can get off the couch and shoot 60 per cent.”

Rivers stood by Simmons post-match, giving short shrift to a question about whether he should have taken his Aussie star off the court down the home straight.

“You want me to take Ben Simmons off the floor? He’s pretty good, so I’ll pass on that suggestion,” Rivers said.

“You guys keep this Ben Simmons narrative going, which is freaking insane. Ben is not a 40-point guy. I just don’t understand why this is not sinking in in this city.

“If I’m Ben, I’d get tired of it. Celebrate him and all the things he does well.

Philadelphia will have to return home to seal the first-round series against the Wizards after a disappointing Game 4 loss.

Philadelphia couldn’t overcome the loss of star centre Joel Embiid, who left the floor in the first quarter with a lower leg injury.

On top of his poor free-throw shooting, Simmons also found himself in foul trouble in the loss to Washington with four fouls.

The 76ers still lead 3-1 against the Wizards and will look to secure the series in Game 5 on Thursday from 9am (AEST).

Bubble Watch: Are mid-majors going to get hosed?