Southside Flyers claimed two wins from the Doomsday Double road trip after holding on to beat Adelaide Lightning in Adelaide on Sunday.

The Flyers (9-1) beat Perth Lynx in Perth on Friday, with the two victories keeping them on top of the WNBL ladder ahead of a showdown with rivals Melbourne Boomers at Dandenong Stadium next Saturday night. 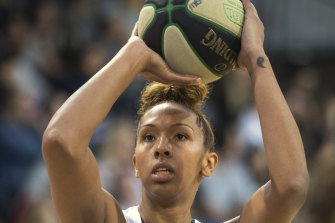 Mercedes Russell was dominant in the paint as the Flyers capped a perfect weekend in Adelaide.Credit:Mick Connolly

Flyers WNBA centre Mercedes Russell (24 points, 13 rebounds) and forward Sara Blicavs (20 points, 10 rebounds) made sure their side took a hard-fought 91-85 win over Adelaide despite the home side regaining the lead in the last term.

"It was a huge win for us, my team just came down to the end and were gritty defensively," Russell told Fox Sports.

The Lightning had no answer for Russell's interior presence. Russell's basket with 41 seconds to play locked in the win, then she blocked a shot from Lauren Nicholson on the next play.

Four-time Olympian Laura Hodges made her return for the Lightning after stepping away from the sport in May last year to have her daughter Ava. Hodges scored four points in nine minutes.

Melbourne Boomers will want to atone for losing their first clash with the Flyers in Saturday's highly-anticipated match-up.

The Boomers will go in with winning form after beating Sydney University Flames 94-81 at the State Basketball Centre on Saturday, while the Flyers sit with the Boomers and Canberra Capitals in the top three of the league after seven rounds.

Boomers guard Maddie Garrick top-scored against the Flames with 26 points including six three-pointers, and when asked about the Flyers she immediately referenced her side's 81-74 loss on Melbourne Cup Eve.

"We didn't play anywhere as well as we could last time, so we are really looking forward to getting one back on them," Garrick said.

"If we both play well it could be a really great game."

The Boomers face a difficult round as they will have to back-up on Sunday to host the Perth Lynx at the State Basketball Centre at 5pm.

The Flyers and Boomers face off at Dandenong Stadium on Saturday at 7pm.

Maker comes up big for Detroit in NBA win