Several teammates and coach Brett Brown were asked Thursday if they've seen any evidence of an improved shot over the first three days of camp. Knowing the question was coming, Tobias Harris even teased the media. 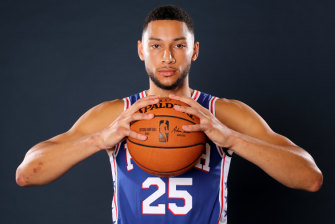 All eyes are on Ben Simmons at the 76ers.Credit:Getty Images

But on the serious note, the forward later praised his teammate for making strides with his shot.

"He's definitely looking for his jumper more," Harris said. "You are seeing guys now play him a little different. Guys like to go under him a lot [in pick-and-rolls]. But because he's looking for it, they are forced to go over the top a little bit more.

"He's definitely improved. He's working on it every day."

Simmons began working out with renowned trainer Chris Johnson this year in Los Angeles. Johnson has trained the likes of LeBron James, Jimmy Butler, and Harris, among other NBA talents.

Last season, opponents backed off Simmons when he had the ball on the perimeter. At times, they didn't even guard him at all since he was hesitant to shoot. That put the Sixers at a huge disadvantage with him as the team's primary ball-handler.

As a result, Brown moved Simmons around in the offence during the play-offs, trying to get him looks closer to the basket and putting the ball in Jimmy Butler's hands.

Last season, Simmons shot 70.1 per cent at the rim and 38.5 per cent from a metre and beyond. He missed his six three-point attempts. He is 0-for-17 on three-pointers for his career.

That's why his shooting is a hot topic, especially after video of him draining jumpers surfaced while working with Johnson.

So after Thursday's practice, the All-Star point guard was asked if he was satisfied with his shots during open looks.

"I've had shots, yeah," he responded.

Have you made them?

"Have I made a three?" Simmons said. "You talking about in practice? Yeah."

Brown is just elated that he hasn't passed up any open look through three days of training camp. The coach thinks that's massive. He also thinks people need to careful about focusing heavily on Simmons' jumpers at this stage. The coach pointed that the Australian is a 23-year-old All-Star.

"It's hugely important and we understand it, especially [during the post-season] in April, May and June," Brown said. "We have to set the stage.

"But my centre point, where I see the world with him, is I think he can be the best defensive player in the NBA."

In addition to thinking Simmons can make an All-NBA defensive team, Brown said he's going to grow as a leader and point guard. In the coach's opinion, Simmons' perimeter game will progressively evolve.

The coach doesn't want Simmons forcing shots just to prove he can make them.

"The groundswell of this whole thing is bizarre," he said. "I understand it. But it gains its own life, and he obviously listens. I hope he doesn't.

Right now, Brown is focused on getting him in position to contribute from the perimeter in the post-season. So in the meantime, he could work on that by taking corner three-point shots in space and shooting when opponents go under in middle pick-and-rolls.

"We can all pinpoint different areas where it all could show itself," Brown said. "But to jam it down like somebody's throat and only say this is his judgement day, there's a lot else going on that we should be looking at."

Kentucky picks right time to show off its potential