Philadelphia: Joel Embiid reiterated his disappointment on Friday (AEST) that the Ben Simmons saga has reached this point, then called it “borderline kind of disrespectful” to teammates that the 76ers’ disgruntled point guard has not yet reported for training camp while also expressing hope that Simmons will return to the team.

Speaking following a training-camp practice, Embiid gave a candid, wide-ranging answer that lasted for more than four minutes when asked about a report from The Athletic that the on-court partnership between him and Simmons has “run its course”.

“The situation is weird, disappointing, borderline kind of disrespectful to other guys that are out here fighting for their lives,” Embiid said.

“We are a better team with him. There’s no question about it. We still hope that he changes his mind [and rejoins the team], but I kind of owe it to these guys to just worry about what we have here. That’s the front office’s job to kind of figure it out, what’s gonna happen. That’s not my job. I’m not the GM. I’m not the owner. So that’s none of my business, honestly.”

Embiid first addressed the Simmons situation at length during Monday’s media day, pausing for several seconds before saying “I’m disappointed” that Simmons has demanded a trade, opted not to come to camp and vowed to never play in Philly again. 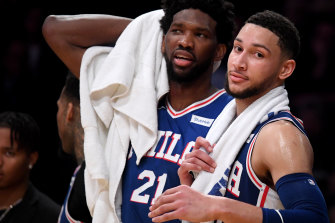 But Embiid added he still wanted to reunite with his All-Star teammate who helped lead the Sixers to the best regular-season record in the eastern conference last season.

The following day, The Athletic report came out. There have long been questions about the on-court (and personality) fit of Embiid, a truly dominant centre on both ends of the floor, and Simmons, an elite defender who on offence needs lanes to get to the basket and is reluctant to shoot.

It was clear Embiid was the franchise cornerstone when he put together an MVP-calibre season in 2020-21, a commitment that was reciprocated by the Sixers when they signed up to a super-max extension during the summer.

Yet Embiid also highlighted the abundance of outside shooting on the Sixers’ roster, from Danny Green and Seth Curry, to Tobias Harris and Furkan Korkmaz, to newcomer Georges Niang. Embiid touched on his ability to step out to the three-point line, “… which I don’t mind. I like to be a basketball player, I like to do everything on the basketball court.”

Embiid also rehashed when the Sixers let Jimmy Butler sign with the Miami Heat and signed Al Horford before the 2019-20 season, “which I still think … was a mistake,” Embiid said. That decision was made, according to Embiid, “just to make sure that [Simmons] needed the ball in his hands.”

“We’ve always had shooters, and I feel like I can really play with anybody and I can make anybody be better on the court,” Embiid said.

“… Our teams have always been built around his needs, so it was kind of surprising to see what was said.” 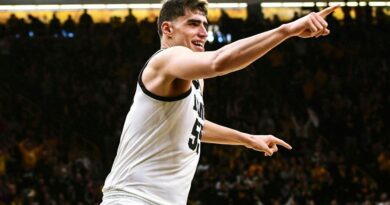 Garza, Cunningham among finalists for Wooden

March Madness 2019: Updated odds to win the NCAA Tournament after Round of 64