CHARLOTTE, N.C. — Hampton guard Jermaine Marrow had just finished an NIT shootaround when he arrived at his team’s hotel in South Bend, Ind., to watch No. 16-seed UMBC play No. 1-seed Virginia in the 2018 NCAA Tournament.

As the Retrievers pulled away in a 74-54 blowout, Marrow and his teammates celebrated in front of the TV with reckless enthusiasm, overjoyed a No. 16-seed had knocked off a top-seeded team for the first time ever.

Marrow, then a freshman, knew he could one day get a similar opportunity to beat a No. 1-seed in dramatic fashion. After all, Hampton plays in the Big South, which sends its conference champion to the tournament typically as a 15- or 16-seed.

He’s not alone in his excitement for that rare chance. In fact, around the Big South — and similarly sized conferences across the country — there is chatter about what it would be like to be the next UMBC. Last year, after Big South representative Radford lost to No. 1-seed and eventual national champion Villanova, leading scorer Ed Polite Jr. found himself ticked off his squad couldn’t match UMBC’s upset.

Polite and Radford could return to the competition this year, but the mid-major system will make it challenging. There’s almost no chance of a Big South school receiving an at-large bid to the NCAA Tournament, so teams must conquer their conference tournament in order to partake in March Madness.

Even though Radford is the favorite to win the Big South, a conference tournament stumble would likely end its NCAA Tournament ambitions. How do schools from one-bid conferences like the Big South stay focused in November and December?

It comes down to roster tinkering, and the desire to uncover a best-possible lineup before the postseason. With less at stake early in the campaign, many mid-major coaches experiment liberally with rotations and substitution patterns, fielding a wide range of player combinations. As a result, players must prove they belong on the court when the games matter most.

“It helps us figure out who’s the best five we can put out there and different things like that,” Polite said. “We get to learn each other.”

DECOURCY: NBA decision to compete against colleges a self-serving move

Once in a while, a small school scores a major upset. Just last season, the Southern Conference’s Wofford toppled then-No. 5 North Carolina in Chapel Hill.

“I love when mid-majors beat high-majors,” said Campbell guard Chris Clemons, who at 5-9 is fighting for a professional basketball career. “It gives mid-majors a lot of exposure when that happens.”

Clemons said the talent gap between top programs and smaller schools has shrunk over the years — as evidenced by star NBA players coming from places other than blue blood programs — and it has reached a point where squads like Wofford or UMBC can knock off the country’s best teams more often.

But High Point coach Tubby Smith, who has almost 600 career victories and guided Kentucky to a 1998 national title win, isn’t sure if huge upsets are actually becoming commonplace. While there were 11 NCAA Tournament upsets (not counting 8-9 games) in the first two rounds of the 2018 tournament, Smith said there has long been upheaval at the college level.

“There’s so many more players playing basketball at the grassroot level, AAU level,” Smith said. “These players are playing against each other all around the country. They see a guy go to Duke or North Carolina, they can say, ‘Hey, I played against him, I can compete with that kid.’”

It’s a belief that should grow after UMBC’s win over Virginia in March. But will the confidence boost mean another monumental upset in the NCAA Tournament?

We’ll have to wait a few more months to find out.

Michigan State’s Tom Izzo on victory over Duke: We can’t ‘get enamored with this win’ 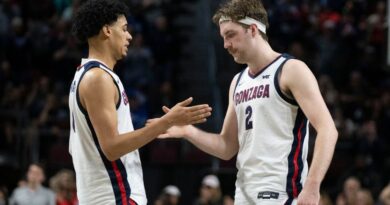 Gonzaga up, Villanova down as three new teams enter Way-Too-Early Top 25 for 2022-23