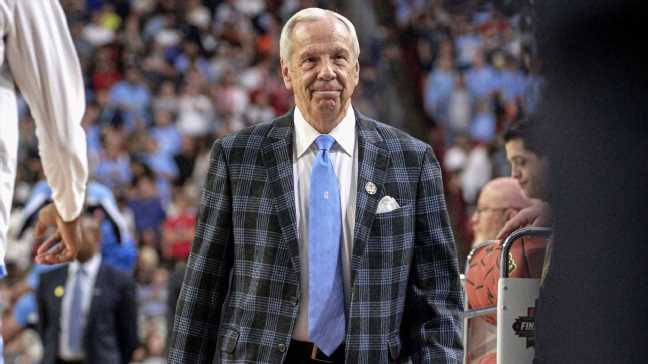 Roy Williams, who has led North Carolina to three NCAA titles in his 33 seasons as a college basketball head coach, is retiring, the school announced Thursday.

The 70-year-old Williams, after a 48-year coaching career, will hold a news conference on the court that bears his name at 4 p.m. ET Thursday.

Williams has spent 18 seasons at UNC, going 485-163 while leading the Tar Heels to national titles in 2005, 2009 and 2017. He also coached the Kansas Jayhawks for 15 seasons, taking them to four Final Four appearances, prior to leaving for his alma mater.

UNC lost to Wisconsin in the first round of the NCAA tournament in his final game, which was Williams’ only first-round loss in 30 tournaments.

He ranks fourth all-time among Division I coaches in wins with a 903-264 record (.774 winning percentage), and he was inducted to the Naismith Memorial Basketball Hall of Fame in 2007. He is the only coach in NCAA history to post 400 wins at two different schools.

After coaching for five years at Charles D. Owen High School in Swannanoa, North Carolina, Williams began his college career as an assistant under Dean Smith at North Carolina. After 10 seasons on the UNC bench, Williams left for Kansas to replace Larry Brown in 1988.

Over 15 seasons with the Jayhawks, Williams won nine regular-season conference titles and went to 14 NCAA tournaments — making it four times to the Final Four and twice to the national title game.

He passed on taking over at UNC in 2000 after the retirement of Bill Guthridge, but ultimately couldn’t say no a second time and returned as coach in 2003 after the Matt Doherty era, which included an 8-20 season.

Williams immediately stabilized the program and broke through for his first national championship in his second season with a win against Illinois, marking the first of five Final Four trips with the Tar Heels. His second title came in 2009 with a team that rolled through the NCAA tournament, winning every game by at least a dozen points, including the final game against Michigan State played in the Spartans’ home state.

The third title was delivered by a team that included players who had lost the 2016 championship game to Villanova on a buzzer-beating 3-pointer. This time, the Tar Heels beat a one-loss Gonzaga team for the championship.

Since taking over in Chapel Hill, Williams has had 21 players drafted in the first round of the NBA draft — the third-most total by any college coach in that span, trailing only John Calipari (35) and Mike Krzyzewski (24).

Along the way, Williams had just one losing season — an injury-plagued 14-19 year in 2019-20 — and otherwise missed the NCAA tournament only in his first season at Kansas when he inherited a program on probation and in 2010 with a UNC team that reached the NIT final.

ESPN’s Jeff Borzello and The Associated Press contributed to this report.