Home » Basketball » ‘Unfit to be associated with’: Brooklyn suspend Irving in anti-semitism controversy

New York: The Brooklyn Nets are suspending Kyrie Irving for at least five games without pay, saying they were dismayed by his failure to “unequivocally say he has no anti-semitic beliefs”.

Hours after Irving refused to issue the apology that NBA Commissioner Adam Silver sought for posting a link to an anti-semitic work on his Twitter feed, the Nets said that Irving is “currently unfit to be associated with the Brooklyn Nets”.

“We were dismayed today, when given an opportunity in a media session, that Kyrie refused to unequivocally say he has no anti-semitic beliefs, nor acknowledge specific hateful material in the film. This was not the first time he had the opportunity — but failed — to clarify,” the Nets said in a statement.

“Such failure to disavow anti-semitism when given a clear opportunity to do so is deeply disturbing, is against the values of our organisation, and constitutes conduct detrimental to the team. Accordingly, we are of the view that he is currently unfit to be associated with the Brooklyn Nets.”

The Nets said they made multiple attempts to help Irving understand the harm and danger of his words and actions, but it was clear during Irving’s interview after practice earlier Thursday (US time) that little had changed.

Irving again refused to apologise, saying only that he meant no harm. He said some things in Hebrews to Negroes: Wake Up Black America were untrue, but he didn’t say he shouldn’t have posted a link to it. 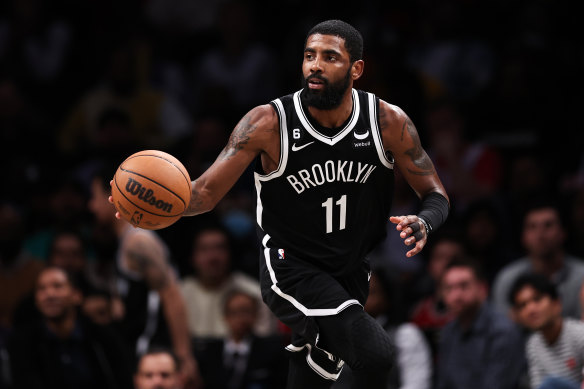 Kyrie Irving’s tweet of an anti-semitic film has been condemned.Credit:Getty Images

“I’m not the one who made the documentary,” Irving said.

He was later asked if he had anti-semitic beliefs, and he didn’t say no.

“I cannot be anti-semitic if I know where I come from,” Irving said.

Irving and the Nets had announced Wednesday, with the Anti-Defamation League, that each would be donating $US500,000 ($795,000) to anti-hate causes. But Silver felt Irving needed to go further.

“While we appreciate the fact that he agreed to work with the Brooklyn Nets and the Anti-Defamation League to combat anti-semitism and other forms of discrimination, I am disappointed that he has not offered an unqualified apology and more specifically denounced the vile and harmful content contained in the film he chose to publicise,” the commissioner said.

It’s the second straight season that the Nets have sent Irving away from the team.

Last year it was when he refused to be vaccinated against COVID-19, making him ineligible to play home games. They eventually brought him back to play road games in December.

“There is no room for anti-semitism, racism, false narratives or misguided attempts to create animosity and hate,” Zussman said. “Now, more than ever, there is a pressing need to ensure education in these areas. We are putting our prior statements into practice because actions speak louder than words.”

Irving will be suspended for the Nets’ upcoming three-game road trip to face the Washington Wizards, Charlotte Hornets and Dallas Mavericks, a home game against the New York Knicks and a road game against the Los Angeles Clippers.

The earliest he could return to the court would be November 13 while the Nets are still in Los Angeles to face the Lakers.