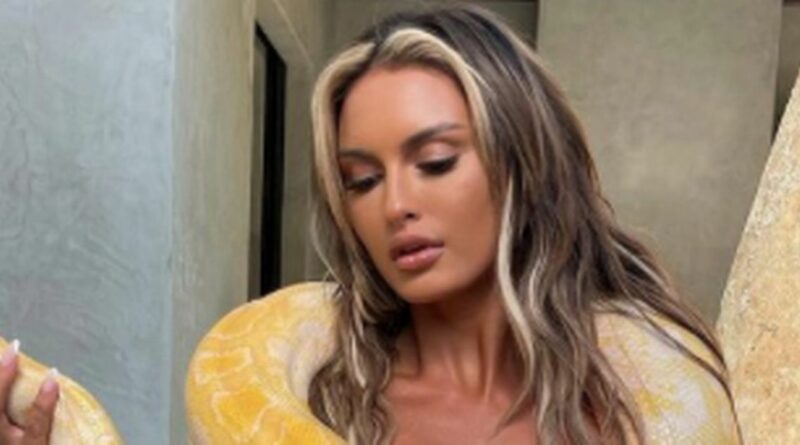 Jake Paul’s glamourous girlfriend, Julia Rose, is no stranger to stripping down.

There have been a number of occasions where she has revealed a fair bit of herself.

She’s not shy about showing off her bits and bobs, as you will see from these various pictures.

Whether it’s a baseball game or an image on Instagram, the American actress, reality TV star, and the founder of 'Shagmag' – a publication that allows payers to subscribe to see Instagram models – Rose is certainly not the shy sort.

So without further ado, let’s go through some of Rose’s raciest snaps. Enjoy…

Rose really went over the line on this picture, featuring nothing on her boobs other than her hand covering it.

She posted the image on Instagram – but unsurprisingly, it’s not there anymore with the social media site having strict rules on nudity and adult content.

In this one, she wowed the crowd during Game 5 of the World Series in 2019. But, for her efforts, she was given a ban from all stadiums by the MLB.

A letter sent to her said: “During the game, you violated the fan code of conduct by exposing yourself during the 7th inning, in order to promote a business.

"You were also part of a scheme in which you induced others to expose themselves to promote their business.

"You are hereby banned from all Major League Baseball stadiums and facilities, indefinitely."

In this snap, Rose showed off her passion for boyfriend Paul, posing by a mirror with the 24-year-old.

In this case, it’s Paul who has his arm around the model.

The picture shows that the two, who have been in an on-off relationship for a while now, are certainly infatuated with each other.

Posing with a snake around her, this is one of the more saucy snaps of Rose.

The humongous snake covers her nipples as she poses by a pool.

She wrote in the caption: “Sadly this isn’t the first snake that has touched my boobs.”

With her gleaming teeth and sitting on a bed, Rose looks promiscuously at the lens with her bikini on.

Only her clothes are almost a skin-like colour, meaning it looks at first glance like she’s entirely naked.

She wrote in the caption: “Like this, if you would lick my teeth.”

In this simple pose in the bathroom, Rose got fully naked, shocking viewers.

She even put a bit of her bum on display as she looks in the camera while clutching a towel.

David Allen opens up about boxing and mental health