Anthony Joshua has weighed in lighter for his showdown with Andy Ruiz Junior after coming in at 247.8lbs.

Joshua was nearly nine pounds lighter than he was for his victory over Alexander Povetkin in his last fight in September at Wembley.

Joshua will be pleased with his weight for his US debut at Madison Square Garden after saying he wanted to be lighter for Ruiz.

The unbeaten unified world heavyweight champ came in considerably lighter than the stocky Ruiz, who tipped the scales at 268lbs, the heaviest of his career.

Speaking before the weigh-in Joshua claimed he wanted to be lighter to be more fluid.

“I’m just in good shape, I have not really been worried about the weight,” said the WBA Super, IBF and WBO champ. “I probably weigh around 112kgs (247lbs) and I feel really good.

“I was around 116kgs (256lbs) for Klitschko and that was maybe a little too heavy. For Povetkin I was around the same and Parker was 112kg.

“I’m more about fluidity now. If he slips one punch I have to be able to come back with another and you cannot do that if you’re stiff.

“It’s really hard to hit a three-punch combo if you’re stiff so I’m loosening up my shoulders and my back so I can land combinations.”

Joshua waved to his fans among the 4,000 crowd inside the Garden for the weigh-in and he has enjoyed himself in New York this week.

He is determined to make a good impression and two huge billboards of him advertising Hugo Boss greeted fans as they entered the Garden.

His supporters also had a ball and they belted out the boxing anthem of Neil Diamond’s ‘Sweet Caroline’.

Joshua also had a gospel choir perform for him, while Californian Ruiz, who fights for Mexico, had a mariachi band serenade him as he walked onto the stage.

Joshua claimed he may use ‘Sweet Caroline’ for his ring walk music.

“Tomorrow it’s about delivering and I intend to do just that.” 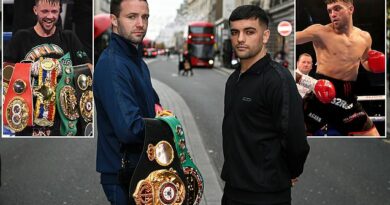