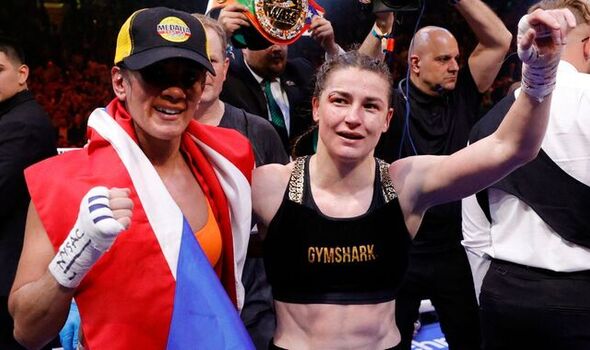 Katie Taylor will not face Amanda Serrano for a second fight this year. According to Taylor’s promoter Eddie Hearn, Serrano and her team “don’t even want to entertain the discussions” for a rematch.

Taylor defeated Serrano on points in a competitive encounter back in April to retain her undisputed lightweight crown. The event billed as ‘For History’ drew an audience of 1.5million viewers on DAZN setting a new record viewership for women’s boxing.

After both women put on a fight of the year candidate display, many called for an immediate rematch with lucrative approaches to hold the bout at Croke Park in Dublin, Ireland. But Taylor will have to wait a little longer for her dream of finally fighting as a professional in her home country.

“Whether [the Serrano team] don’t think they can win the fight or whether they just want to get some confidence or, I don’t know, but they don’t want the rematch right now,” Hearn told Bad Left Hook.

Joshua attempting to overcome ‘mental problem’ ahead of Usyk rematch

“We want to do that fight in front of 80,000 at Croke Park in Ireland. We reached out to their team and it was, like, there’s no number. It wasn’t even, ‘Let’s negotiate, let’s make an offer.’ It was, ‘We don’t want to do that rematch right now.’ She’s gonna go away, she’s gonna fight I think in August.”

“I thought Amanda Serrano felt like she won the fight and could beat Katie Taylor, and they’d be turning down a huge amount of money. But they don’t even want to entertain the discussions.”

“Katie Taylor’s desperate for the rematch. She’s got the opportunity to do a huge fight in Ireland, and we wanted Amanda Serrano, because [the first fight] was just incredible. So, we spoke to Most Valuable Promotions (Serrano’s promoters) and they just said, ‘We don’t really want to go to Ireland, it’s not the money, you could offer us X and we wouldn’t take it.’

“It was surprising because I thought Amanda felt like she won the fight and she could beat Katie Taylor, and they’d be turning down a huge amount of money. But they don’t even want to entertain the discussions.”

With the rematch looking unlikely to happen this year, Hearn and Taylor are reportedly turning their attention towards fights against top MMA stars. Cris Cyborg and Holly Holm are believed to be the most likely next opponents for the Irish superstar as she waits for negotiations with Serrano to be settled.