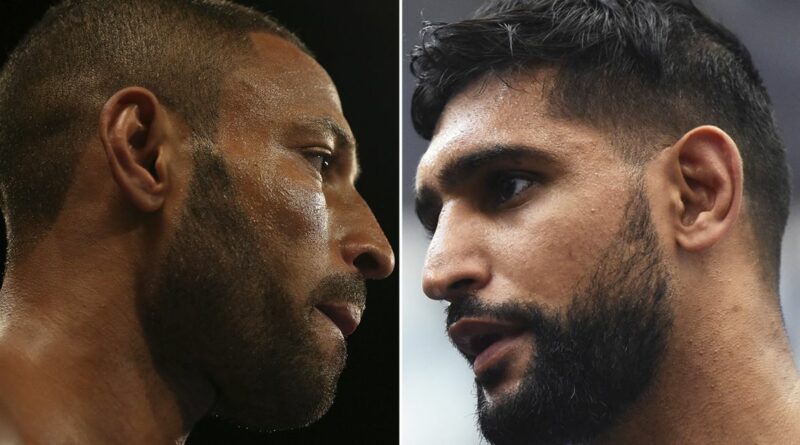 The year is 2021 and yet somehow Amir Khan against Kell Brook is still being talked about as a potential fight.

If you still had some Christmas turkey leftover in the back of the fridge it would not be as stale as the chat about these two welterweights meeting.

But, in true boxing form, the bout is now probably likelier to happen than ever.

Why? Money, of course. There's still plenty to be made from it if not the cash that it would have generated four years ago when it was a really exciting fight.

But also because neither man has anywhere else to go.

They've exhausted their shots at the elite in the division and rinsed all the money they can make from the top end of the fight game.

Now they know fighting each other is the only big payday left for them.

The reward finally outweighs the risk of losing to their bitterest of rivals.

Promoter Eddie Hearn has already declared he still has an interest in making it happen.

Of course they are keen, they can see an easy pay-per-view fight to sell.

There will be pantomime antics at the press conference, name-calling and Brook will roll out the 'Amir Khandashian' gag to mock his rival's soap-opera personal life to hearty chuckles from his team.

Fans will lap it up, forget that both men are 34 and have eight defeats between them and hand over their money for tickets and box office buys.

And fair play to them, if that's your thing. There's still some intrigue as to who is the best out of them British pair.

There will be excuses in defeat for whoever loses but it could still be an interesting fight.

It should have happened four years ago when they were at their peak and before they started going off taking on daft bouts (but very lucrative ones) against Canelo Alvarez and Gennady Golovkin.

But it just goes to disprove what is now becoming an old cliché in boxing.

We always hear that the sport suffers from interest because the best don't fight the best often enough.

But is that really what the causal fan wants?

Last year, Vasiliy Lomachenko took on Teofimo Lopez to decide who was the best lightweight in the world.

Yet all major UK broadcasters snubbed it because they believed few fans would tune in.

This year, Scotland's Josh Taylor will put his IBF and WBA light-welterweight titles on the line against WBC and WBO champion Jose Ramirez to decide the undisputed 10st fighter on the planet.

Khan against Brook will outsell it on pay-per-view by hundreds of thousands if it happens.

The circus around boxing seems to sell it to the masses more than the best against the best.

And that is why Khan against Brook will probably happen once crowds are allowed back into arenas.

It's just a shame they couldn't put on a show for fans like they could have four years ago.

Thomas Tuchel’s Chelsea reign starts without a finish as Blues play out goalless draw against Wolves
We and our partners use cookies on this site to improve our service, perform analytics, personalize advertising, measure advertising performance, and remember website preferences.Ok