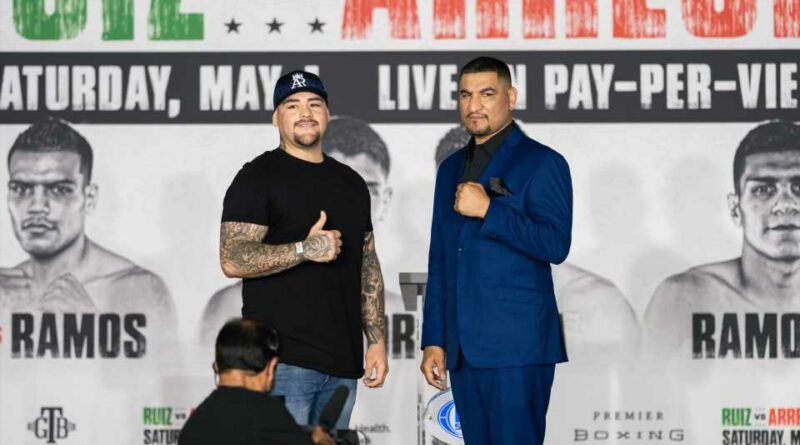 Former unified heavyweight champion Andy Ruiz Jr. will return to the boxing ring for the first time in over a year when he faces former title challenger Chris Arreola at the Dignity Health Sports Park, in Carson, Calif.

Ruiz (33-2, 22 KOs) last fought in December 2019 when he came up short in defense of his WBA (Super), IBF, WBO and IBO heavyweight titles against Anthony Joshua. He lost a unanimous decision in a highly anticipated rematch at the Diriyah Arena in Diriyah, Saudi Arabia. The fight came six months after Ruiz shocked the world and stopped Joshua in the seventh round to become the unified champion and hand Joshua his first defeat as a professional.

Since the loss, Ruiz opted to leave longtime trainer Manny Robles and join forces with Eddy Reynoso, who also trains Canelo Alvarez, Oscar Valdez and Ryan Garcia. Not only that, Ruiz has dropped a considerable amount of weight and appears to be in the best shape of his life heading into the fight with Arreola.

Arreola (38-6-1, 33 KOs and 2 No Contests) has long been a fan favorite due to his all-action style. Unfortunately, he has often fallen short in championship opportunities with losses to Deontay Wilder, Bermane Stiverne, Tomasz Adamek and Vitali Klitschko. The 40-year-old knows that it is now or never if he ever plans to get another shot at a championship. Can he pull off the upset?

Here’s everything you need to know about the upcoming fight.

When is Andy Ruiz Jr. vs. Chris Arreola?

The Andy Ruiz Jr. vs. Chris Arreola PPV main card begins at 9 p.m. ET on Saturday night, with the champions expected to make their ring walks at approximately midnight ET, depending on the length of the earlier fights.

What TV channel is Andy Ruiz Jr. vs. Chris Arreola on?

The Ruiz vs. Arreola fight is a FOX Sports PBC event that is available via pay-per-view through many cable and satellite providers; check with your local provider for more information.

How much does Ruiz Jr. vs. Arreola cost?

Where is Ruiz Jr. vs. Arreola taking place?

The Ruiz-Arreola fight will take place at the Dignity Health Sports Park, in Carson, Calif. It will be the second time Ruiz competes at the outdoor venue while Arreola fights at the facility for the first time.

The former unified heavyweight champion is a massive favorite at -3335, which means that one would have to wager $3335 just to earn a profit of $100. Arreola is a former title challenger but has routinely come up short in big moments. He’s a huge underdog at +900, where a $100 bet would return $900.