Anthony Joshua has named seven fighters he could face before he hangs up his gloves.

The heavyweight world champion is due to defend his three belts against Kubrat Pulev this summer.

Originally slated for June 20, the clash has been delayed due to the coronavirus crisis which has ground sport to a halt.

But assuming he retains his titles, Joshua will then set his sights on a plethora of rivals.

"Who else? I think that’s probably the majority. Adam Kownacki, Jarrell Miller… you know, that’s six names."
Joshua went on to add Dillian Whyte to the mix having beaten his domestic foe in 2015.

"Once I've beaten Tyson Fury, Dillian Whyte can come and get this work as well. It won't be that good, it will be one-sided."

Joshua and Fury had hoped to clash at the end of the year but the pandemic looks to have put paid to that prospect.

Fury must first defend his own world title against Wilder in their trilogy clash pencilled in for October 3.

That would push back a potential undisputed fight until February. 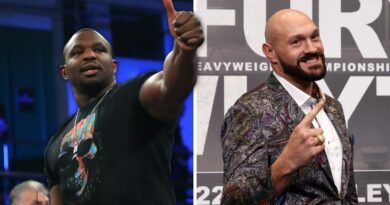