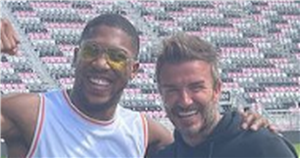 Anthony Joshua appears in fighting condition as he shows off his huge arms while posing alongside David Beckham in Miami.

Football legend Becks is owner of MLS side Inter Miami and appears to have welcomed AJ to the American city.

The two can be seen with beaming smiles in an Instagram post shared by Beckham at the Inter Miami stadium.

AJ, who has signed a contract to fight Tyson Fury is dressed in a vest and shorts and looks ready to step into the ring.

The boxer shows off his huge bicep muscles in the picture, making Beckham look small in comparison.

Beckham captioned the image: “So happy to have the champ in town… WELCOME TO MIAMI”.

Joshua has previously been snapped alongside Beckham’s wife Victoria, and there could be a friendship blossoming.

And fans loved the image of Joshua alongside Real Madrid and Manchester United icon Beckham.

One responded: “Two class acts”, alongside a clapping emoji while there were plenty of flames and hearts commented.

Beckham has been seen at many boxing events and in 2013 flew to Macau to support Manny Pacquiao against Brandon Rios.

At the time, Beckham said: “I’m a huge fan of Manny's. I met him a couple of years ago in the Philippines, when I was on tour there with the Galaxy and also there with UNICEF. And he truly is an inspirational person.

“I haven't spoken to him, but I know how much this fight is going to mean to him this weekend because of everything that is happening in the Philippines.

“The eyes of the world have been on the Philippines the last couple of weeks and I know how much this is going to mean to him.

"This fight will mean so much to him because for a slight moment this fight is going to put a smile on the people's faces in the Philippines. And we all send out love and our hopes to the people in that part of the world.”

Tyson Fury’s search for a new opponent: ‘Oscar Rivas is the best and logical’ choice