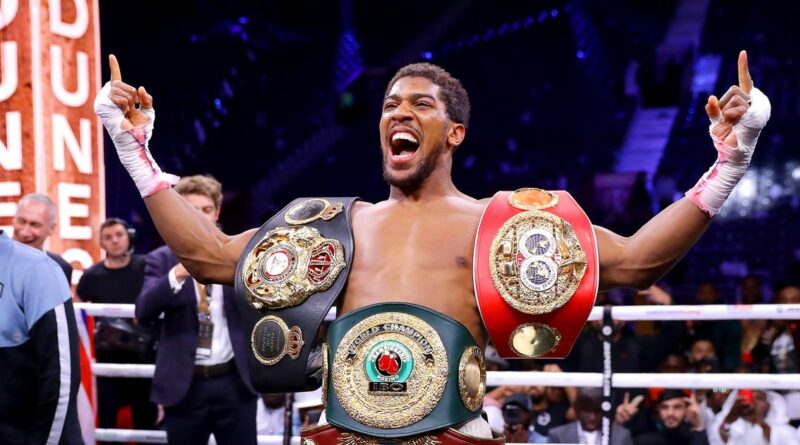 Anthony Joshua's bravery has been questioned as he decides whether to defend his world titles against Oleksandr Usyk.

Joshua must either face mandator challenger Usyk or vacate his WBO belt after being ordered to face the Ukrainian following the collapse of his undisputed fight with Tyson Fury.

Promoter Eddie Hearn had indicated that Joshua would likely face Usyk next, but his rival promoter Alexander Krassyuk has cast doubt on the fight taking place.

"We are waiting for King AJ's decision whether he is brave enough to get dethroned," Usyk's promoter Alexander Krassyuk told Sky Sports.

"I have no idea at the moment," he said when asked if he was confident Joshua was going to accept the fight. "We are expecting his decision."

The WBO's deadline of May 31 for the fight to be made has come and gone without an announcement.

But Hearn has insisted there will not be a purse bid for the bout with Joshua preferring to vacate his belt.

“We’ll either make a deal or we’ll vacate,” Hearn said last weekend. “We won’t be going to purse bids or anything like that, and mucking around.

“By the way, I don’t blame the WBO. They were actually quite generous to us with our time. I mean, let’s be honest – it dragged on a lot, didn’t it?

"So, I have to take my hat off to [WBO president] Paco Valcarcel, because he did put himself, his neck on the line, to allow that fight, when Usyk had a strong case for it not to be allowed.

“But when the time come, [Valcarcel] had to do what he had to do. So, I’m not annoyed with the WBO. I’m just annoyed that it seems that basically AJ is told who he’s got to fight every single time.

Should Anthony Joshua fight Oleksandr Usyk next? Let us know in the comments

"But that's the problem of having three or four belts. That’s just how it is.”

Joshua was slated to fight Fury for the undisputed title on August 14 in Saudi Arabia, with contracts signed on both sides for the event to take place in a newly-built stadium in Jeddah.

But an arbitration ruling at the eleventh hour meant that Fury was ordered to fight Deontay Wilder in a trilogy fight for his WBC belt, which is now set for July 24 in Las Vegas.

And after the decision it appeared that Joshua was set to fight undefeated Usyk in the UK, with a late August or early September date mooted.

However that fight could be in jeopardy with the former undisputed cruiserweight champion yet to hear from Joshua's side with regards a deal.

Usyk was considered one of the best in the world pound-for-pound when he won every belt at cruiserweight but has yet to set the heather alight at heavyweight.