Unbeaten WBO super-middleweight champion Saunders says his dream fight would be against Canelo on Cinco de Mayo, the May party weekend on which the Mexican traditionally boxes.

“That’s because he’s the face of boxing and I’d like the chance to beat him,” Saunders told Sky Sports. “Here’s the really scary thing – I know that I can do it.

“I would take pleasure in ruining Cinco de Mayo for the Mexican fans.”

?"I can't wait to showcase what I can do." ? @bjsaunders_ is looking forward to fighting in front of a 'new audience' on the #KSILoganPaul2 undercard pic.twitter.com/CjEibTLal4 Saunders held the WBO middleweight title when Gennadiy Golovkin held the division’s IBF, WBA and WBC gold. Canelo beat Golovkin after a draw in their first fight, and will next go up two divisions to challenge WBO light-heavyweight champion Sergey Kovalev.

But he still holds WBA and WBC belts at middleweight, and Saunders believes they have always been on a collision course.

He said: “I watched Canelo fight Ryan Rhodes and Matthew Hatton. I’ve known since day one, ever since I put on a pair gloves, that our paths would cross. I always knew, and dreamed, what would happen when we did. 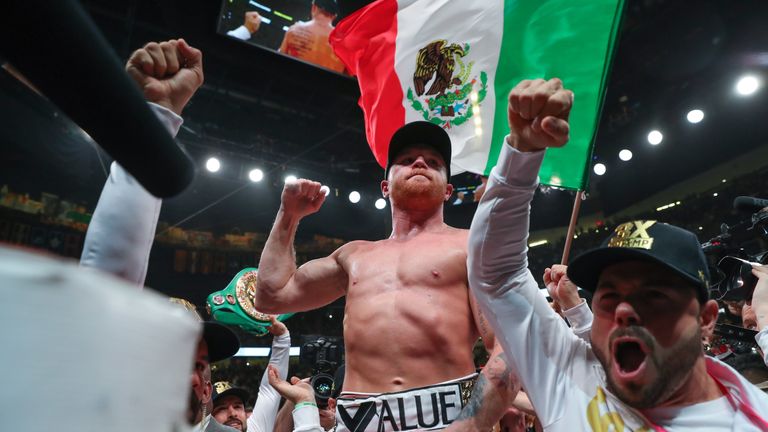 Canelo’s only defeat in a 55-fight career that has brought him world titles in three divisions was against Floyd Mayweather, six years ago.

“With a fighter like Canelo you can’t go into the ring with a game-plan,” Saunders said. “You need to think: ‘this is my one and only chance to change my name from being good to great’.

“[Former trainer] Jimmy Tibbs always said there’s a difference. If I said someone was a great fighter, Jimmy would say: ‘No, Muhammad Ali and Rocky Marciano were great fighters – that guy is a good fighter’.

“I might look terrible in 10 fights in a row but if you put Canelo in front of me, it’s a different ball-game.

“A fighter like me? My style has beat him before, and I believe I can do it again.”