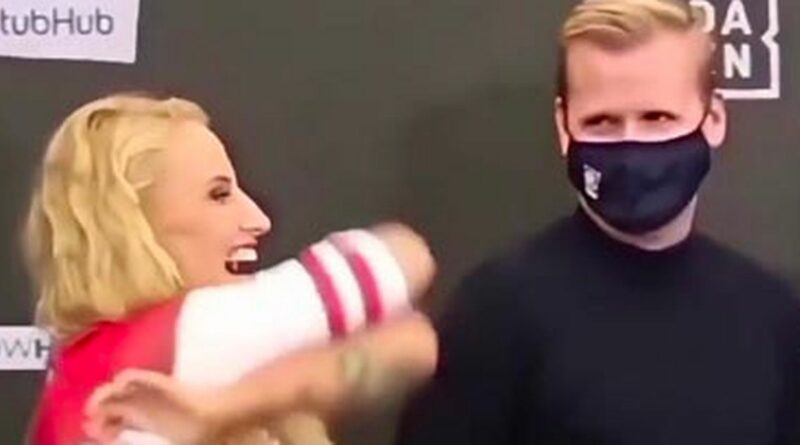 Ebanie Bridges has caught the eye of fans for more than one reason since her WBA bantamweight title shot against Shannon Courtenay last year – and tends to steal the show at weigh-ins.

The Blonde Bomber became very popular to British boxing fans despite losing to Courtenay by decision in April, going on to beat Bec Connolly by TKO in August and Mailys Gangloff less than a month later.

Although her knockout power in the ring is undeniable, her social media presence has no doubt been boosted by her decision to wear eye-catching outfits to pre-fight weigh-ins.

That was no different for the second of her three UK fights last year, in which the Australian opted to wear leopard-print underwear – which left boxing officials baffled.

With Matchroom boss Eddie Hearn admitting that he chose to look up to the ceiling rather than get caught with his eyes on Ebanie, another staff member involved in the event was just as keen to keep his gaze occupied elsewhere.

In a throwback video uploaded to Instagram this week, the man in the background can be seen looking to the ceiling as well as rubbing his head as Ebanie stripped off her tracksuit.

Although he was no doubt uncomfortable in trying to avert his line of sight, followers of Ebanie have been left in hysterics while praising her appearance.

A second added: "Always laugh at them struggling not to look."

A third continued: "It’s always how uncomfortable the men in the back be for me… comical!!!"

With a fourth agreeing: "Haha that guy trying to avoid eye contact at the start."

Will you watch Ebanie's next fight? Tell us in the comments section

Speaking Behind The Gloves following a similar situation ahead of her later fight against Gangloff, Hearn opened up on his technique of looking into the distance.

"Anywhere the eyes look, there are cameras everywhere, do you know what I mean?," Hearn began.

"So the best way to go about it is just to look somewhere else. Ebanie knows what she's doing. She's a tremendous fighter.

"Obviously a lot of people want to see her weigh-in as well.

"It is what it is, but for me, it's not about keeping composure, it's about making sure the camera doesn't catch me at a particular time where I might be looking somewhere that looks like I'm looking somewhere else.

"I'm respectful of that and I think I'll just find a spot at the back of the wall somewhere." 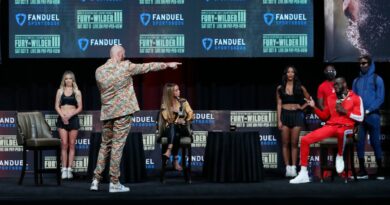