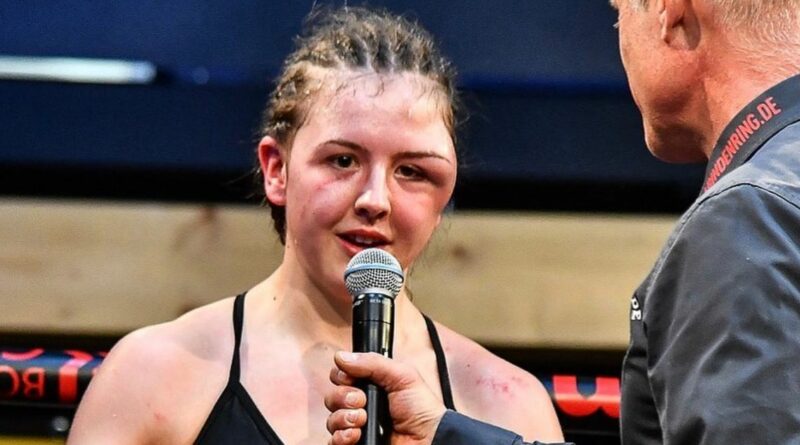 German over Cheyenne Hanson suffered a massive hematoma during her fight against Ukranian Alina Zaitseva, and was left with a swollen face.

The 23-year-old clashed heads with her opponent, and the fight was abandoned as a result.

In the immediate aftermath of the clash, Hanson's head started to swell up.

The referee of the bout was left with no choice but to wave off the bout, with the fight going to judges' scorecards.

Hanson was ahead on the judges scorecards at the time, and was awarded the fight via technical decision.

Only afterwards was her injury properly evident, as she took to social media to show the full effect. Hansen posted a selfie to her Instagram account, and her face was decorated with a long scar below her eye and a lump over her other.

Her right eye was completely blackened, and the area around had completely swollen. The win earned her the BDB International German Championship belt, and Hanson also shared a picture with her new belt.

In the image, taken immediately after the bout, her face was already swollen in a manner similar to UFC star Joanna Jedrzejczyk's last year.

She wrote: "It was a tough fight," before thanking her training partners and sponsors. Another image shared to her Instagram showed a before and after of the swelling, and the difference is clear for all to see.