As far as ring walks go in boxing, one would be hard-pressed to find an example worse than Scott Quigg's ahead of his 2010 showdown against Andrey Kostin.

The Bury native was only too proud when boxing returned to his hometown after a 13-year absence. Prizefighting was banned in the Greater Manchester town after Mike Tyson took a chunk out of Evander Holyfield's ear in 1997.

Quigg—a rising star at the time, boasting a 17-0 record heading into his clash with Kostin—wanted to commemorate the occasion when that suspension was lifted more than a decade later. Rather than walk out in the usual manner at Castle Leisure Centre, the super-bantamweight was pre-recorded making the journey from his mum's house nearby.

While the sentiment may have been spot-on, many have agreed the execution didn't quite hit the mark. Dressed only in his ring gear, Quigg looked awkward as he exited the front door to Eminem's 'Not Afraid' and embarked on a short jaunt to the venue.

But one minute of walking was made to feel a lot longer as spectators saw the star tread pavements and roads, passing wheelie bins and one poorly positioned passer-by. Thankfully the entrance to Castle Leisure Centre had automatic doors, as Quigg would have struggled to pull a handle with his gloves on.

Most viewers couldn't help but cringe as one commented: "Anytime anyone tells you 'there's no such thing as a bad idea,' show them this video." Another asked: "How could he think this was a good idea?"

The consensus wasn't unanimous, however, as others delighted in the unique—albeit odd—approach. "How is this the worst ring walk ever!?" asked one boxing fan. "Maybe if he lost the fight. This is absolutely legendary and original."

Quigg clearly delighted in fighting in front of a home crowd considering he finished Kostin in the first round. In fact, he went on to score three more stoppage wins at Castle Leisure Centre over the next 18 months, which included winning the British super-bantamweight crown with a seventh-round TKO of Jason Booth.

The 34-year-old's ring-walk days are now over after he retired in 2020, the former WBA world champion having lost to Jono O'Carroll in his send-off. It's not often one gets to fight so close to their childhood home, and Quigg capitalised to live long in the memories of many supporters. 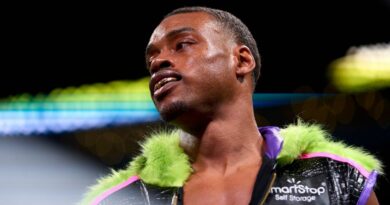