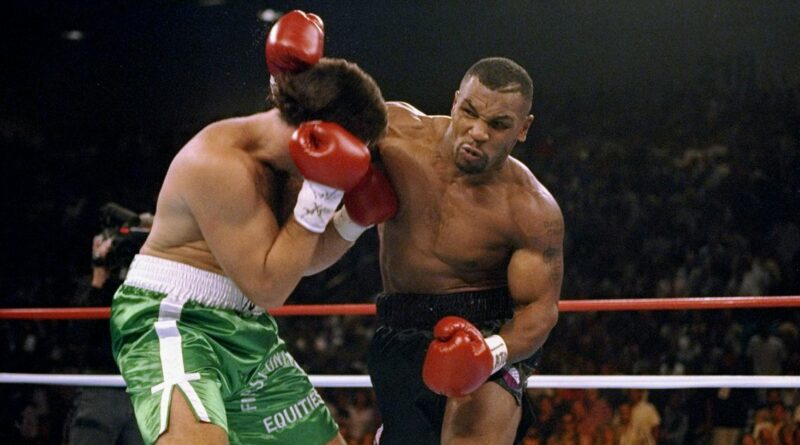 Boxing fans continue to be convinced that a 'time traveller' was sat ringside to watch Mike Tyson in his prime as he convincingly beat Peter McNeeley.

Taking place in 1995 the fight ended inside the first round as Iron Mike showed no forgiveness with some powerful punches and McNeeley was eventually disqualified after his worried manager entered the ring. Looking back at the fight recording fans were left bewildered by a ringside supporter who appears to be recording the fight on a modern-day smartphone.

The reason for the conspiracy theory was that the device seemed to have a camera lens on the top left like modern phones, whereas cameras of the period would have had the lens in the middle.

READ MORE: How old is Mike Tyson? Height, net worth and when he started boxing

The 'time traveller' claim came after a video was posted to YouTube of the fight in 2015 and focused on a fan attending recording the bout on his device.

One Twitter user seemed convinced that the device pictured was a Samsung star android model in white which was first released in May 2013. They wrote: "This is 1987’s fight of Mike Tyson. It's still a mystery, one man taking a video of mike via Samsung Star Android model (white). Is he a time traveller? Plz tell your fact about this."

However, a report from HITC has looked into what the device could be, and appears to have solved the mystery. Instead of being a smartphone as many believed, the device could have been either a Casio QV-10A or a Logitech Fotoman.

Both cameras had a lens in the corner of the device, and were both released in 1995. A fan on Twitter seemed to believe it was a Fujix Simple HI8 Camcorder, released in 1993. They said the conspiracy theory was now 'solved'.

Do you think it was a 'time traveller' watching Mike Tyson's fight against Peter McNeeley? Let us know your thoughts in the comments section

"It was thought when Mike Tyson fought Peter McNeeley in 1995, that someone in the crowd was filming on what looked like a smartphone and was therefore a time traveller," they added on Twitter. "Turns out it was a Fujix Simple HI8 Camcorder."

However, many still believe that it was in fact a 'time traveller' returning to watch Iron Mike at his incredible best.