British boxing icon Frank Bruno was sectioned under the Mental Health Act during lockdown, it has emerged.

Bruno, 59, is one of the country's best loved sporting figures and developed a huge following in the 1980s and 1990s.

The London fighter competed at the top of the heavyweight division for over a decade, reaching the pinnacle with a WBC world title.

He faced a succession of all-time greats, including Mike Tyson twice and a battle of Britain clash with Lennox Lewis in 1993.

But he has now revealed how he hit "rock bottom" during lockdown with his family and friends fearing for his safety.

"It has been the hardest and most terrifying time of my life. I hit rock bottom and ­suffered a breakdown," Bruno told The Sun.

"For my own safety and for the safety of others, I was sectioned and taken back into hospital, I had to face up to the fact my illness had returned after years of keeping a lid on it. I had to fight for my sanity and there were times I feared I wouldn’t get through it.

"Being locked up against your will is the worst thing you can ever imagine. It’s ten times scarier than boxing. Being in a hospital for weeks during the pandemic only made it all the more terrifying."

Like many people during lockdown, the former heavyweight champ struggled to cope with the lack of routine, structure and work imposed by restrictions.

His family were forced to take drastic action after noticing a worrying string of behavioural issues from Bruno.

This included trying to arrange boxing bouts, excessive training in the gym and a period of weight loss that promoted help being sought by his family.

Bruno opened up about how he was taken to Central Bedfordshire mental health unit on June 28 last year, where he underwent six months of intensive treatment.

Thanks to the support of family and friends, Bruno got the help he needed to pull himself "away from the cliff edge."

The former heavyweight world champ, who was sectioned for the first time in 2003, has since received care from community nurses and is on medication to help control his illness.

Bruno was previously diagnosed with Bipolar, but has been receiving treatment to manage his condition and says he is now close to being back to his best. 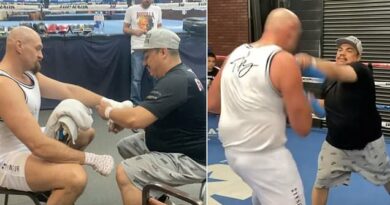