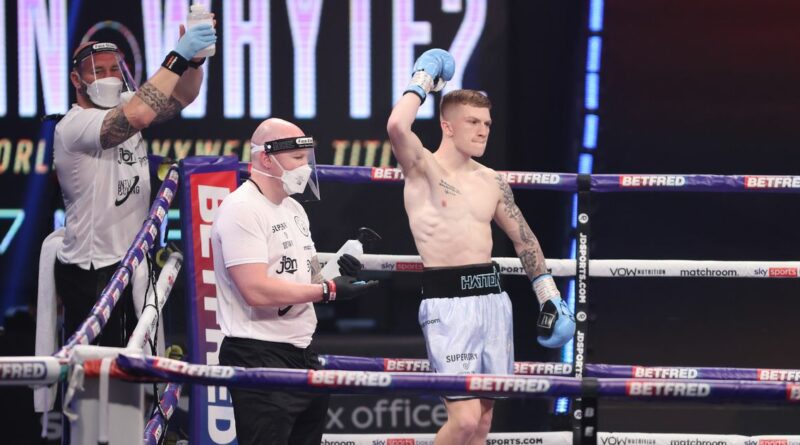 Campbell Hatton admitted the nerves got to him after winning his pro debut to take the first step along the long road to emulating his legendary dad.

Hatton was given every round by referee Victor Loughlin to beat Jesus Ruiz 40-36 in their lightweight four rounder and he was ragged at times.

He displayed some of Ricky’s trademark body shots, but journeyman Ruiz caught him too often and he knows he still has much to learn.

“I’m made up with it, it was my pro debut and you only get one,” said Hatton.

“I don’t think I boxed my best, I know I can do a lot better than that. As much as I tried not to, I think the nerves go to me a bit so I can only get better next time.”

Hatton is not so much Ricky’s son as his clone and he looks, talks and fights like him.

He also walked out to ‘Blue Moon’ and Ricky admitted he had a tear in his eye.

“I knew these masks would come in handy because no-one could see my crying when they were signing ‘Blue Moon’ and ‘There’s only one Campbell Hatton’,” he joked.

“It was very proud for me as his dad and for the family.

“We saw in flashes what he’s capable of. It was a good learning fight. Sometimes he got a little too involved, but that will come with experience.”

Hatton, 20, was too keen to please at times and he forced the fight at the Europa Point Sports Complex in Gibraltar as he looked for the stoppage.

He hurt Ruiz, who has now lost all 11 of his pro fights, with his hooks to the body and bloodied his nose in the second.

Hatton cut Ruiz’s right eye in the third and winded him 30 seconds from the end of the fourth, but could not get the stoppage he so badly wanted.

Promoter Eddie Hearn knew the occasion might get to Campbell and says he will move him along slowly because he is so green.

“There was a lot of responsibility and pressure on his shoulders,” he said. “I said to Matthew Hatton this morning, he won’t be able to breathe after four rounds and he’s still blowing now.

“It’s baby steps with Campbell Hatton. The journey’s going to be great, but it’s going to take a long, long time.”