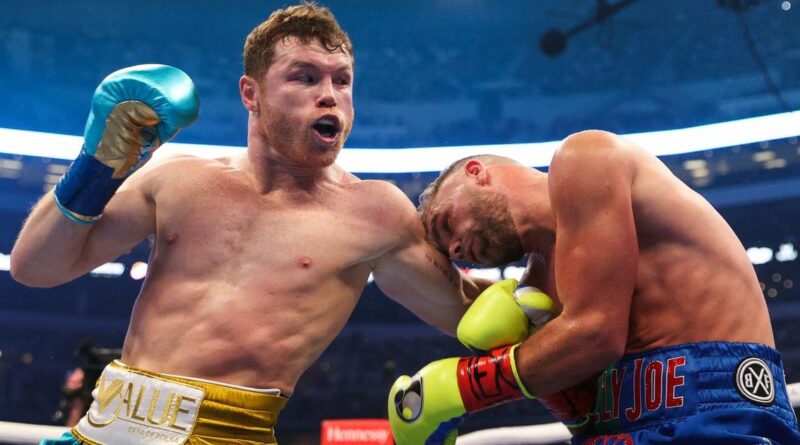 Joe Calzaghe believes Canelo Alvarez is on his way to becoming an all-time great – but the fighter in him would have loved to have fought the Mexican.

And the British boxing legend would have fancied his chances against the pound-for-pound superstar.

Canelo will look to become the first ever undisputed champion at super-middleweight when he puts his WBA, WBO and WBC titles on the line against IBF champion Caleb Plant this weekend in Las Vegas.

Calzaghe, 49, was denied the chance to win all four belts in the division as he was stripped of the IBF belt just before he beat Mikkel Kessler.

But he is in awe of Canelo’s achievement to be able to deal with boxing politics to get all the titles together after also winning belts at light-middleweight, middleweight and light-heavyweight. “It’s a big, big fight but can I just say that my fight with Kessler should have been the undisputed fight but unfortunately I had to relinquish the IBF because they wanted me to fight a guy called Robert Stieglitz,” said Calzaghe.

“To get an undisputed fight at any weight with the politics of having all the belts it’s very rare.

“If I’m honest I’m quite surprised that Canelo has been as effective at super-middleweight, because he’s only 5ft 8in and he has come from the lower weights. What can I say? He’s carried the power.

“It’s difficult [to rank him] because he’s still boxing.

“If he continues the way he’s going and winning titles, he has to be in the top 10 of all-time probably based on what he’s achieved.

Who do you think would win a fight between Calzaghe and Canelo? Comment below

“And his longevity, longevity is important as well. Winning the title is one thing, we’ve seen fighters win a title and then lose it, so for him still be champion is impressive.

“He’s still only 31, he’s just a true, true champion and I have a lot of respect for him.”

But Calzaghe smiles when it is put to him how a fight between him and Canelo would go if both men were at their peak.

“Yes I’d win! He’s never fought a Joe Calzaghe and I never fought Canelo, but it’s a fight when I look at it that I would love to have had.

“Of course, I wish I was around now when Canelo is around. Of course it would be a tough fight, but I think I would have won.

Tyson Fury said recently he felt Calzaghe has been forgotten about in terms of his legacy.

While there are probably few asking Canelo this week in Las Vegas about going one step further than the Welsh boxing legend and winning all four belts.

“I got my kudos. I won the Sports Personality of the year and I was inducted into the Hall of Fame in the first ballot,” added Calzaghe, who retired unbeaten in 46 fights.

“I’m proud of my achievements and what me and dad [Enzo] did.

“We had some great fights but as time goes on other champions come through and that is the way of the world.”