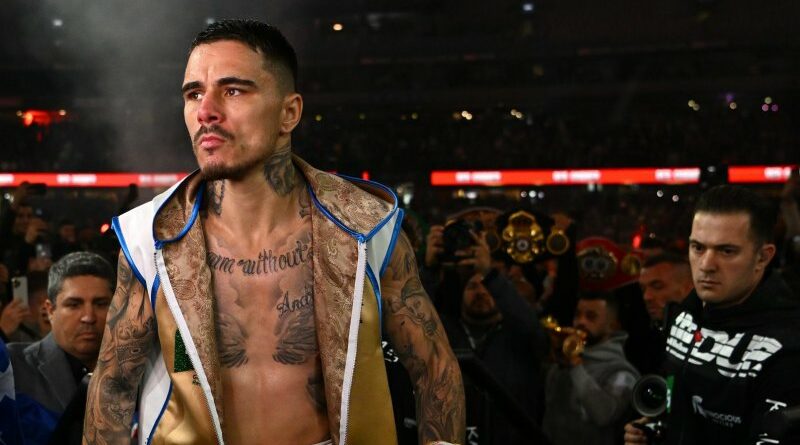 That is the desire of NSW Sport and Tourism Minister Stuart Ayres, who wants George Kambosos jnr to hold his rematch against American Devin Haney in Kambosos’ hometown of Sydney later this year.

“Destination NSW would be more than happy to talk to his management team,” Ayres told the Herald. “NSW would absolutely be open to hosting a rematch.”

Typical of boxing, the prospect of a rematch remains murky at best as Kambosos and his supporters wrap their heads around his devastating loss to Haney in their undisputed lightweight title fight at Melbourne’s Marvel Stadium on Sunday afternoon.

For weeks, Kambosos has been adamant he had a rematch clause in his favour and, under the terms of that agreement, it would be held in Melbourne.

He repeated the same pledge to the Herald in his dressing-room soon after the fight. 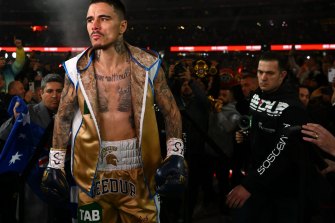 George Kambosos heads to the ring on Sunday.Credit:Getty

Then, in the media conference, legendary Top Rank promoter Bob Arum, who represents Haney, said the fight could also be held in Sydney or Brisbane.

Meanwhile, the rest of the boxing world is asking what’s the point of a rematch at all given the commanding way in which Haney dominated the fight, his long jab keeping Kambosos at bay.

Of one thing you can be assured: whatever happens will be determined by money and who’s getting most it.

If Ukrainian legend Vasiliy Lomachenko returns from the frontline in the war against Russia, you can bet American promoters and broadcasters will push hard a fight against Haney in the US, no matter what the contract with Kambosos says.

If the rematch against Haney does go ahead, though, the Kambosos camp should do everything in its powers to hold the fight in Sydney.

He should also consider holding it in a venue smaller than Marvel Stadium, which lacked atmosphere despite hosting a crowd of 41,129 including a very large and vocal Greek supporter base cheering on their self-proclaimed “Spartan warrior”.

Because the ring was situated in the middle of the field, there were vast expanses of vacant space between the ringside seats and the stadium’s outer seating.

The noise was palpable in the stands, and Kambosos could hear the crowd support while preparing in his dressing-room underneath, but the atmosphere felt flat sitting ringside.

Sure, the nature of the fight meant there wasn’t much to cheer about, but the stadium felt, at times, too big for a boxing match.

That’s something Kambosos should consider if any future fights are held in Sydney.

Kambosos’ father and manager, Jim, has already flagged a fight at the new Allianz Stadium, which is due for completion at the end of August and holds 40,000, but it could provide the same vacuous feeling as Marvel.

Perhaps a better option would be CommBank Stadium in Parramatta, which could hold up to 30,000 people, or Qudos Bank Arena, which holds more than 21,000.

Those venues would provide the hostile and intimidating atmosphere missing from Sunday’s fight.

Then again, it won’t matter if the rematch is held in a phone box if Kambosos can’t figure out a way to get inside Haney’s jab.

The 28-year-old quotes liberally from Chinese general Sun Tzu’s The Art of War. Against Haney, it was more like the Art of Snore.

Kambosos blamed the referee. Other experts, including Jeff Fenech, said Kambosos should have taken the fight to the American.

How Team Ferocious sells its next fight will be interesting, regardless of whether it’s against Haney.

Kambosos’ story has been an easy sell: the relative unknown from Sylvania who shocked the world against Teofimo Lopez.

He and Jim have fallen out with some notable boxing reporters and commentators, but mostly they’ve been a reporter’s dream to work with.

I’ve never seen an athlete thank the media enough for their coverage, even after his frustrating defeat against Haney. All class.

Some fans, though, weren’t impressed with the mind games employed against Haney, including claims the American was a “rat” for allegedly leaking information about Lopez before the fight against Kambosos in New York last November.

That so-called trash talk is nothing new in boxing, partly used to generate ticket and pay-for-view subscriptions but also gain psychological advantage.

Truth is, having watched from close range in the few days before the fight, Haney’s team tried to bully Kambosos, including the weigh-in when they shoved their faces, cameras and mobile phones behind the towel as Kambosos stripped down to nothing as he tried to make weight.

Jim Kambosos polarises opinion and is never afraid to walk away from confrontation, but I simply saw a father protecting his son, who was bullied as a kid and refuses to be bullied now.

“He’s butted heads with people,” Kambosos told me before the fight. “They just don’t know how to take him. His best interests are for his son, and for his fighters. He’s not going to let a promoter or somebody else tell him what to do.” If that’s the case, Jimmy, bring Ferocious home. 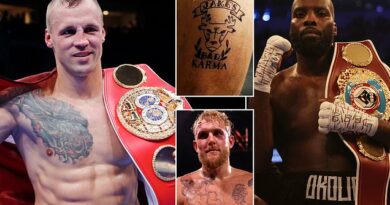