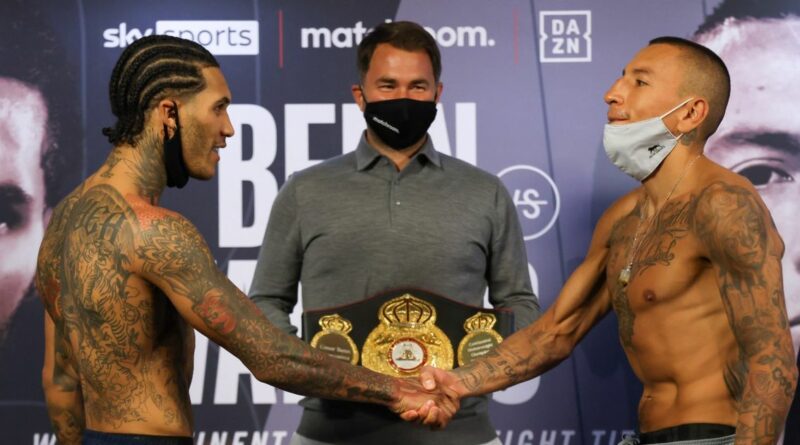 Conor Benn continues his ring education tonight with a step up in opposition against the dangerous Samuel Vargas in London.

Vargas will be no stranger to UK fight fans having pushed Amir Khan all the way three years ago.

He has only lost at the highest level, most recently against the highly-touted Vergil Ortiz, and should prove a stern test for Benn.

The son of a legend has improved every time we have seen him in the ring and will aim to take another step towards a world title shot tonight.

On the undercard, Savannah Marshall defends her world title for the first time and Shannon Courtenay takes on Ebanie Bridges in a grudge match.

Here is everything you need to know about tonight's fights…

What time is the fight on?

The main event is likely to start at 10.30pm but this could change depending on how quickly the undercard fights are completed.

The opening fight of the night is expected to start at 7pm.

How to watch on TV and live stream

The fights will be shown on Sky Sports Action from 7pm until 11pm. The fights can also be live streamed using the SkyGo app, if you are a Sky Sports customer.

Who is on the undercard?

“If you watch Vargas’ fights he comes in and he brings it but so do I. Of course, he’s tested at a higher level and got more experience than me, but everyone I fight moving forward is going to have experience on me, I’ll always go into the fight the less experienced fighter because of my lack of amateur background, because I’m only 24.

“People will question that, it’s my job to prove them wrong, it’s my job to get in there and do a number on him Saturday night. It’s going to be my hardest nights work, I know what he brings, he’s a tough South American who loves to fight and fights with his heart on his sleeve. You’ve got to give him credit where it’s deserved.

“I keep getting asked now about other fights, I made the mistake once in my career looking past opponents and look what happened – I hit the deck twice and it turned out to be my hardest nights work in my career. I’m fully focused on Vargas; I know what he brings and he’s in there to win and show me how it’s done.

“I’ve been training hard for this fight; I’ve been working hard and visualising this fight and I’m ready to go. Whatever he brings, I’ll match it – it’s going to be a shootout at some stage of this fight.

“It’s kind of sad we don’t have fans in the venue, I was looking forward to having a lot of fans there because it would’ve beee a great energy, you need that. The fans in London have a lot of love and support which I’m thankful for.

“This is a fan-friendly fight, he fights, I fight my ass off. I fight for my family, for everything I have, for the desire to win and become better at life and boxing, there’s so many motives I have to fight for.

“I never make no excuses, even in my loses, I always work my ass off in training camp. This fight in particular, I haven’t seen my family or Lee in two months. Everybody keeps telling me how focused and driven I am because it’s all I’ve done, there’s nothing else to do but box, study, know my enemy and do my job.”