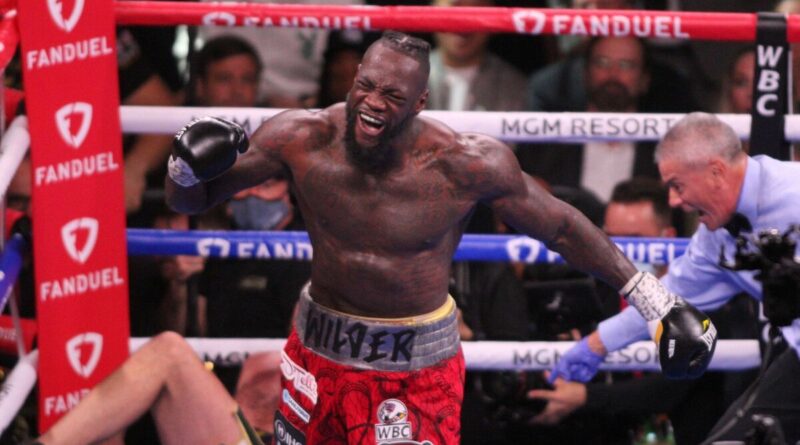 Deontay Wilder has been urged to avoid two fighters in particular as he plots his return to the ring. The former world heavyweight champion has not fought since his epic trilogy fight with Tyson Fury last October, which the American lost despite twice sending ‘The Gypsy King’ to the canvas.

Following the defeat, ‘The Bronze Bomber’ dismissed any notion of retirement, although a comeback date – or opponent – is yet to be finalised. Regardless, he’s unlikely to be in the world title picture anytime soon, with the final details of Anthony Joshua’s rematch with Oleksandr Usyk in Saudi Arabia currently being finalised.

Despite Fury insisting he’s now retired from the sport, whoever wins that clash will be expected to officially challenge the Manchester man in a long-awaited unification bout. Indeed, Sky pundit Carl Froch had previously warned Joshua that a clash with Wilder represented too big a risk to his title aspirations.

Rumours have been rife of a bout with British fighter Joe Joyce, who is 13-0 in his pro-career so far. But renowned boxing trainer Stephen Edwards has had his say on who Wilder should, or more spefically shouldn’t, be facing next – and he’s warned him off the Olympic silver medalist.

JUST IN: Boxer throws punches at thin air in frightening footage after knocking rival through ropes

“I wouldn’t mess with [Frank] Sanchez or Joyce but Wilder is gutsy.” he told boxingscene. “I think he would fight anybody. He just seems to be that type of guy. He proved in the trilogy fight with Fury that he meant what he said about being willing to die in a boxing ring.”

Cuban fighter Sanchez, 29, has 20 wins from 21 pro-fights, with the only blemish on his record a non-contest. But whilst Edwards thinks either fighter would represent too much of a risk for Wilder, he believes that Dillian Whyte, who was soundly beaten by Fury at Wembley in April, would be a suitable opponent.

“I’ve always believed Wilder would’ve ko’d Whyte within two rounds,” he said. “I let people say whatever they wanted about Wilder ducking him. It’s just a bad match up for Whyte in my opinion.

“Whyte reacts too slow to punches and he gets hit with too many big shots he doesn’t see. You can’t have that issue with Wilder or you’re going to sleep.”