If Tyson Fury is able to secure an upset win over WBC heavyweight champion Deontay Wilder on Saturday in Los Angeles, it will complete a remarkable comeback from the depths of an extended boxing hiatus.

Fury shocked the world when he dethroned long-reigning heavyweight Wladimir Klitschko in Dusseldorf in November 2015, but did not enter the ring again competitively until this past June.

A well-documented battle with drink, drugs, weight gain and mental health problems made it seem fanciful the 30-year-old would ever grace such a stage again.

Wilder’s unblemished record of 40 wins, including 39 knockouts from 40 fights, makes the American a betting favorite, but if Fury can overturn the odds he will join a select band of greats who proved the doubters wrong to regain the heavyweight title.

The first two-time champion in the history of boxing’s top division, Patterson was also the youngest heavyweight king when, at the age of 21 in November 1956, he knocked out Archie Moore in five rounds. He held the title until being battered in a three-round loss by Ingemar Johansson. Patterson was floored by the Swede seven times in a comprehensive defeat, but remarkably won their 1960 rematch via a fifth-round stoppage.

The drama continued in Patterson vs. Johansson III as the American hit the canvas twice and returned the favor inside the opening round before rallying to win in six. Sonny Liston brutally ended Patterson’s second reign and an attempt to unseat the man who would emulate his historic feat proved unsuccessful.

Ali was working toward the peak of his peerless powers when he dominated Patterson in late 1965. By 1967, however, “The Greatest” was beginning a three-and-a-half-year boxing exile on account of his refusal to be drafted into the U.S. Army for the Vietnam War. Ali’s dancing feet had slowed by the time he returned and he was floored and outpointed by nemesis Joe Frazier in their “Fight of the Century ” in New York in 1971. A second defeat and a broken jaw followed against the formidable Ken Norton.

It meant few gave Ali any hope against knockout machine George Foreman in Zaire in 1974, with many fearing for his health. But he befuddled Foreman with his “rope-a-dope” tactics, blocking shots, absorbing punishment and landing stinging counters before a decisive salvo off the ropes in round eight brought a picture-book knockout.

That win paved the way for a grueling third encounter with Frazier that left both men considerably diminished. Ali’s slide was even more evident when he lost to Leon Spinks in 1978, although he had enough left in the rematch to become the heavyweight division’s first three-time champion.

On this date in 1974: #MuhammadAli took down the undefeated “Big George” Foreman in The Rumble In The Jungle in Kinshasa, Zaire. #PeoplesChamp pic.twitter.com/xHSexr4I2t

After his chastening loss to Ali, Foreman prevailed inside five savagely violent rounds against Ron Lyle and made similarly short work of Frazier. But he walked away after a points loss to Jimmy Young in 1977, finding God and — so it would seem — the buffet line. A comfortably proportioned “Big George” was much mocked on his return to the ring 10 years later as he plodded to a fourth-round win over Steve Zouski.

“In those 10 years I relaxed, got fat and had babies. What else can you expect?” was an unperturbed Foreman’s assessment and on he went, dutifully climbing the rankings. A points loss to WBA and WBC champion Evander Holyfield restored credibility before Foreman dropped a unanimous decision to Tommy Morrison for the vacant WBO crown. It proved third-time lucky on this most improbable and enduring of comebacks in 1994, when Holyfield conqueror Michael Moorer was left flat on his back by a thunderous right from the 45-year-old Foreman — 20 years on from “The Rumble in the Jungle.”

Holyfield initially lost his titles to Riddick Bowe before gaining revenge in a rematch. The majority-decision loss to Moorer followed, and he was also stopped in the rubber match of the thrilling Bowe trilogy. It meant the 34-year-old “Real Deal” felt very much like damaged goods by the time his long-anticipated shot at Mike Tyson arrived.

“Iron Mike” was himself a two-time champion by that stage, having bludgeoned the popular Briton Frank Bruno on the other side of prison time for a rape conviction. The Holyfield-Tyson rivalry is now best remembered for Tyson’s implosion in the rematch, where he was disqualified after biting Holyfield’s ear. But Evander’s exploits in the initial encounter, one where he was considered cannon fodder, marked the crowning achievement of a magnificent career as he broke Tyson’s heart and will on the way to a stunning 11th-round triumph.

Britain’s last unified champion before Fury, Lewis became a three-time champion on account of avenging a pair of shock knockout losses. Caught cold by Oliver McCall in London in 1994, Lewis claimed their 1997 rematch in Las Vegas in bizarre circumstances when the troubled American refused to defend himself.

That returned the WBC belt to Lewis’s possession and set up his defining nights against Holyfield for the undisputed championship. He was forced to wait for the validation of victory over Tyson by poor preparation and Hasim Rahman’s right hand in South Africa in 2001. An immediate Vegas rematch saw the 36-year-old operating with menacing precision — his sledgehammer right off a roundhouse left leaving Rahman scrambling forlornly on the canvas.

Fury’s exploits in befuddling Klitschko were particularly impressive, given they ended a dominant reign of 18 successive title defenses. The prospects of Klitschko enjoying such sustained mastery over boxing’s big men seemed remote when Corrie Sanders bounced him off the canvas for two rounds back in 2003, ending a two-and-a-half-year WBO reign.

That defeat came in between knockout losses to Ross Puritty and Lamon Brewster, but Klitschko remodeled his style under Emanuel Steward — the esteemed trainer who masterminded a similar rebuilding job for Lewis after the McCall debacle. With a ramrod jab and devastating right hand, they ruled the heavyweight division with an iron grip. 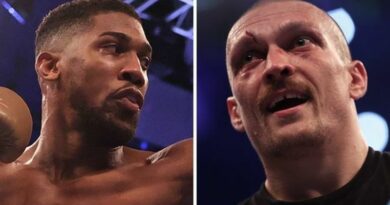 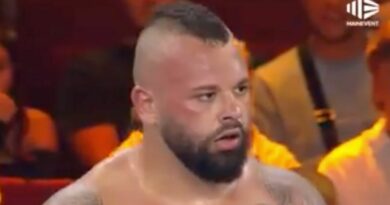